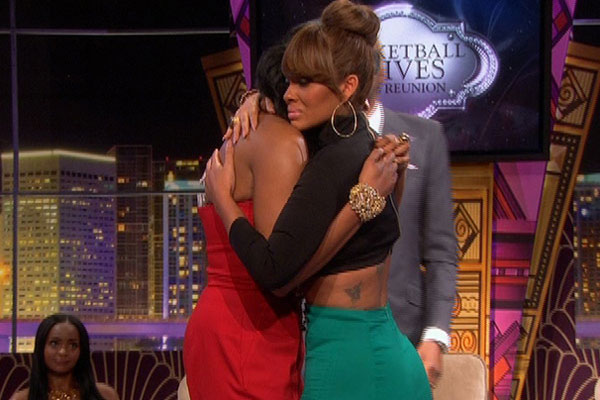 The (Un)breakable bond between women; Ev & Jen make up

We fall out, we send bad texts, scream on voice mails and try to get our mutual friends to take sides (even if we have to reveal little “well, she said this about you” secrets) but in the end, most of the time we get a chance to kiss and make up with our “girlz” that we swore we would never speak to again.

As was the case with our favorite two Basketball Wives (once dubbed “Mean and Evil”) Evelyn Lozada and Jennifer Williams.

Former NBA player and “Reunion Show” host John Salley – who I swear is just as messy as a woman – did a good thing last night when he managed to take the venom out of these two women and get them to share an embrace.  That was a feat NO ONE else was able to do, even though it took an actual lie detector test to prove to the women they both still loved each other.

Part 2 of the reunion show was full of recaps and explanations about who did what to whom in season 4, but none of it was really interesting until the end when the results for Ev and Jen came back.

Instead of being the coup de grâce that put the final nail in their friendship coffin, it gave the women the answers they needed.

At any rate, Salley led the two women to center stage and let the magic happen.  The two shed tears and a good hug; which was probably the most HUMAN occurrence from this entire season.

We are certainly glad to see the two besties were able to take a step in a positive direction.

Well, we of course can’t let this end without touching base on another great moment; the moment when Kesha Nichols was able to finally speak to Tami Roman in a civilized manner and stand her ground.

Tami repeatedly denied that she was a bully – a lie no one believes – and tried to stress that she was only trying to force (ummmmm bully) Kesha to “keep it real” with her and confront her face-to-face about her hang-ups.  The only problem is Kesha is not the one who had the problem with Tami, it was actually in reverse as Tami attacked the poor young woman from first sight about her ethnicity, coughing or voicing her concerns to someone other than her, etc. etc. etc.

Once again, Tami never made any situation comfortable for the woman to talk to her about anything.  She seemed to always be looking for a fight – when she wasn’t lying to her therapist about her “progress.”

In the end, Shaunie O’Neal gave everyone the “we have been through too much to let this come between  us – the world only sees a little of us and we really are great women who do great things” speech and told the audience what we already knew.  Despite the whole (yeah right) cliffhanger of the show’s future after her talk with the pastor, Shaunie confirmed there will be a season 5.

We never had any doubts.

If any of us can walk away with anything from this season we can say we’ve learned this:

***And all of this can be done while rocking high fashion!***

See you in season 5 divas!

Just in case you want to see the moment again, check out this clip courtesy of VH1.