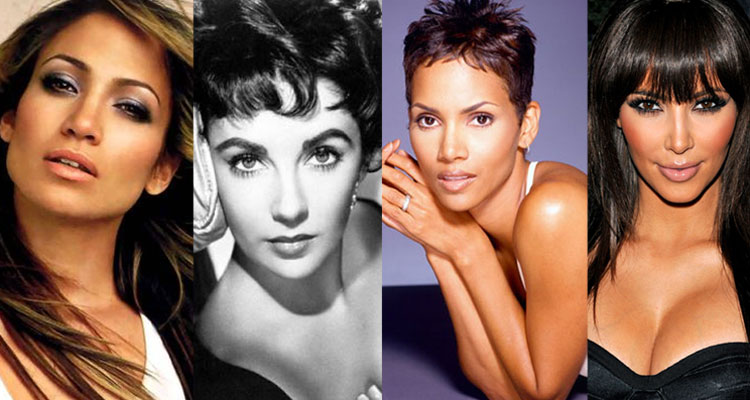 Curse of the dark-haired beauty: J-Lo,Liz,Halle,Kim –and all the men!

What do Elizabeth Taylor, Jennifer Lopez, Halle Berry and Kim Kardashian all have in common?  Aside from being drop-dead gorgeous, none of them – not one of them – could seem to keep a man.

While we all know money can’t buy you love; these women clearly show that neither can cute faces, firm backsides and careers that only few could ever dream of.  As great as everything was professionally, they all—at some point—were very unlucky in love.

Hollywood remained abuzz as the late Elizabeth Taylor bounced between husbands faster than movie roles and it seems many young starlets are following in her footsteps.

Superstar diva Jennifer Lopez, who Forbes listed as one of the richest women in the world, kept the talk shows filled with hot topics as she bounced between “leading men” in Hollywood amidst her infamously plunging necklines, multiple albums and movie roles.

While Oscar winner Halle Berry was making every one’s “most beautiful” list, the beauty we all saw on screen was in deep contrast to the ugliness that played out in her relationships.

And the latest raven-haired, brown-eyed beauty – reality show star Kim Kardashian—keeps social networking sites and gossip blogs lit up over what is – and is not – “real” about her love life.

So, if they can’t have a lasting relationship, what in the hell does that say about the rest of the world? I tell you what—it says that no matter how perfect we think someone or something is – we each have our own problems behind closed doors.  But unlike these women, we can’t afford to “pay off” each man we dump or get a fat alimony settlement in reverse, so we better get it right the first time!

Her marriage to British actor Michael Wilding lasted from 1952 to 1957.  Wilding and Liz had two sons, Michael and Christopher.

She jumped the broom with Broadway and movie producer Michael Todd in 1957, but that ended tragically when he was killed in a plane crash just one year later.  The two had one daughter, Elizabeth “Liza” Frances.

Liz was then married to pop singer Eddie Fisher from 1959 to 1964, and that relationship came with its own bit of drama.  Eddie was once married to actress Debbie Reynolds and had also been good friends with Liz’s deceased husband, Michael Todd.  The Liz-Debbie-Eddie scandal was so taboo back then because the two couples had once spent lots of time together on the Hollywood social scene.

Liz was married to actor Richard Burton twice.  The first time from 1964-1974, then again from 1975-1976.  The two had a fiery relationship and their public arguments heated the gossip pages long before TMZ came along!

She then got away from her Hollywood romances and married Republican senator John Warner in 1976, but that marriage – like the others – ended in 1982.

Liz then did the unthinkable and married Larry Fortensky, a construction worker, in 1991.  She left him –and his mullet behind – in 1996.

Former “In Living Color” “Fly Girl” Jennifer Lopez also had a laundry list of men to contend with Liz.  Her first “real relationship” according to her, was with David Cruz.  The two began dating when she was only 15 and their relationship lasted a solid 10 years, but after that, longevity did not seem to take center stage.

She was married to Ojani Noa, a waiter, from 1997 to 1998, dated rap mogul P Diddy from 1999 to 2001, then married dancer Cris Judd just a few months after her relationship with Diddy ended.  Jennifer and Cris’ marriage ended in 2003 amidst rumors that she had a “thing going on” with A-list actor Ben Affleck.  Ben and Jen, who became known in the Hollywood circle as “Bennifer” were engaged to be married, but canceled the wedding and called it quits in 2004.  J-Lo then married singer Marc Anthony and the couple was blessed with a twin boy and girl.   After seven years,  J-Lo and Marc split in 2011, and now she has a new flavor – 25-year-old Casper Smart.

Halle Berry, the first black woman to win an Academy Award for Best Actress, has had her highly-publicized ups and downs when it comes to love.

Halle lost 80-percent of her hearing in one ear after she was allegedly beaten by an unnamed — albeit famous — boyfriend in the 80s and things have continued to spiral out of control since then.

She was married to baseball player David Justice from 1992 to 1997 and, in an interview with Hello Magazine, Halle said her break-up with David ruined her self esteem and took her to the lowest of lows.

She also married R &B crooner Eric Benet, which ended after he admitted to sleeping with numerous women while suffering from sex addiction.  Eric said in his defense (but is it really a valid one), that even though he cheated, Halle also brought her own flock of problems to the marriage and was just “playing the victim.”

After Eric and Halle called it quits, she said she would never marry again.  Halle went on to have a child with French-Canadian model Gabriel Aubry and after that break up, the two became involved in a messy custody battle over their daughter, Nahla.

Now Halle is said to be engaged to French actor, Olivier Martinez.  We wish her all the luck in the world and hope she’s finally found “the one.”

And on to what could be the hottest Armenian of all times—Kim Kardashian.  It all started with singer/ actor Ray J and the infamous sex tape and after that, she went from being famed OJ attorney Robert Kardsahian’s daughter and Paris Hilton’s gal pal, to one of the most photographed women in the world today.

After Ray J, Kim and football player Reggie Bush became an even hotter item for tabloids, but for him, the spotlight of being “her beau” may have been a bit too much and the two parted ways.  Kim moved on to another football player, Miles Austin, but that romance also dimmed under all the spotlights.

Then what could have been the biggest heartbreak for many of her fans was the whirlwind romance, fairytale wedding and only 72-day marriage to NBA player Kris Humphries.  While many fans scorned the entire Kardashian clan, saying they used Kris only for publicity, Kim vehemently deny those accusations.  She claims the two were just on different paths, rushed into things and were just not compatable.  Anyone watching her reality show following the wedding,  got a first-hand look of how the two just did not appear to be equally yoked.  Which brings us to her latest “dating” adventure—her relationship with the outspoken, in-your-face, arrogant as hell Kanye West.  We love his music, but wow…we would love to see if this works out.

The point is, that no matter how great someone else’s life looks from the outside with all the glitz and the glamour, when it comes to matters of the heart, we are all stamped with a “Fragile, Handle With Care,” sign.

Beauty is only skin deep, but CRAZY is front and center.  And LOVE is hot, passionate, unpredictable, moody, hard at times, and once again – CRAZY!!!  Its ups and downs are the stuff that great songs are made from.  True love sees no weight, no height, no race, no color, no curves…it skips over the big breasts, the firm thighs, the tight abs, the small waist lines and the smoky eyes.

Love is Love and it is a bitch for us all!

As for our divas still searching for that fairy tale:  Sometimes you have to kiss a lot of frogs to find that prince…….RRRRRRIIIIIIBBBBBBIIIIIITTTTTT!  And I am still croaking with you, ladies because — in all fairness — a lot of us are bouncing around while trying to land “Mr.  Right,”  just not everyone’s business is headline news!)