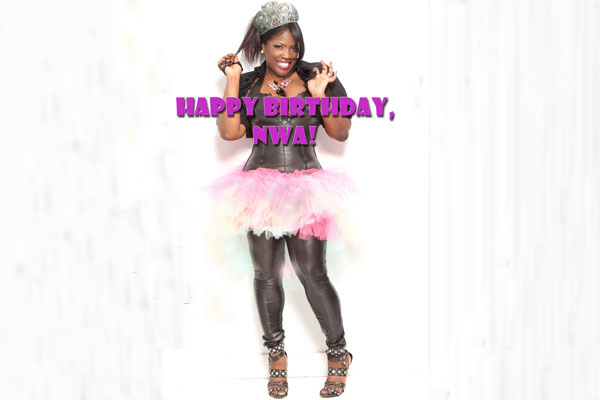 WOW, how the time does fly! Lip Service:  News with Attitude had reached its first birthday/ anniversary and I am one proud mama!

I work as a digital media producer (fancy title for web producer) at a television station, but with all the stories we publish every day, I thought a little “something-something” was missing.  So I launched this site on April 11, 2011 as a way to talk about topics in the non-traditional way.  I must be honest and let you know I am a “Hip-Hop baby” to my heart and there are some things that are not often covered or overlooked by traditional outlets.  Although I still deal with the tough subjects, my personal site gives me the chance to cover the “softer” side of news, entertainment and relationship drama—often with a funny twist.    And let’s face it; it’s a hot mess out here, sometimes!

I wanted to showcase my professional work in my own little “digital resume,” and give black women in my generation a voice, showing that we really are capable of doing it all!

Since the launch we have had the honor of being featured in Golden Icons Magazine, a publication sponsored by Chicago Bears player Amobi Okoye, and was featured in an article by Goddess Intellect’s Telisha Ng, blogger extraordinaire for Hello Beautiful.

Well, 300 posts, 1300 Facebook “Likes” and almost 5,000 Twitter followers later, I am ready to take things up a notch.  I am working on a new look, new ads and new stories – with the addition of two more “HOT” columns coming soon.

When I launched, a longtime family friend posted my very first comment and she has been a constant support system to this day.

“It looks like it was just yesterday..wow were tha time has gone…now u are all grown up n doing your thang..your own web page..babygirl im truely proud of you….now you’ve took the frist steps…put it in God hands and he will do the rest….good luck on your way to the top…love you,” — Frances Burton

Love ya back sistah!

Need a little more background?  Here’s how it all began!

About Lip Service:  News with Attitude

From the average to the edgy, Lip Service:  News with Attitude covers it all.  Based in Houston, Texas, this site is committed to delivering local and national news, celebrity highlights, feature articles taken straight from the streets, (sometimes off the beaten path) relationship articles and much more! Giving you a daily dose of news, entertainment and lifestyle tips– with an attitude, of course!

How many hats fit my head?

I am a Digital Media Producer for the Emmy and Edward R. Murrow award-winning website, KHOU.com.  What does that mean?  Well, I am responsible for writing breaking news, daily briefs and headlines, aggregating content from partners, site architecture, encoding video and whatever else comes my way in the day!  I am also constantly on the move, writing feature articles and shooting slideshows around the community.

During election season, I build the election database, which ingests and outputs election results for on-air and digital platforms, for KHOU-11.

Now for the drumroll………my “baby” if you will:  I am the owner, creator, editor-in-chief, photographer and model (when I can’t afford to pay anyone else) of  Lip Service:  News with Attitude and this web/blog is second to none when it comes to letting it all hang out!

How did I get here?

Frankly put, I had a wonderful college professor and mentor, Serbino Sandifer-Walker, who kept pushing me forward even when I wanted to take a break.  At TSU, I served as president of the TSU Association of Black Journalists, executive producer for KTSU 90.9 FM student newscast and contributing reporter for the campus newspaper, The Herald, all while working as a men’s shoe salesperson at Nordstroms in the Houston Galleria. (So be careful men, I know a quality shoe when I see it!)  I landed one of my biggest interviews after selling a pair of Allen Edmonds to Chief Justice of the Texas Supreme Court Wallace B. Jefferson who granted me a 15-minute exclusive interview for KTSU 90.9 FM during the historic 2008 presidential election– still a shining moment in my life!

During my senior year in college, I interned at KRIV-Fox 26 and at KHOU’s Great Day Houston, with host Deborah Duncan- -which led me to where I am today.

On the final day of my internship at Great Day, I was offered a contract position with KHOU’s web department as the weekend web producer, and was promoted to full time within my first year of employment.

My day job and my hobby are worlds apart, but yet still closely related, if you know what I mean.  Mainstream media can be SO SERIOUS at times, so it feels good to have a release – with an opinion – from time to time.  Enter Lip Service:  News with Attitude!

My site, Lip Service:  News with Attitude is a separate project from KHOU.com and KHOU-TV 11 and any of my thoughts or blogs are not the views of the station.

I spend a great deal of time on the campus of TSU, mentoring and working with students in the School of Communication, and often allow students to shadow me at work, to learn the media biz “from the inside.”  I believe if you give back…you get back…and we all need each other to make it in this world.

I love where I’ve been, what I do and where am I going in this industry.  The possibilities are endless.  But guess what – at the end of the day – my biggest and best productions to date are my two children.  I am a mother FIRST and ALWAYS!

So, the same party music we used to launch the site is the same way we will celebrate our first year; we will let “Uncle Luke” do the honors.  Don’t worry, the version is PG-13 and all in good fun!

Like we said the first time, Lip Service: News With Attitude loves to learn from past mistakes, and after looking at the video, ladies remember — it is not appropriate to gyrate on the side of a pool in a bikini and sneakers. But hey– it was the 90s!