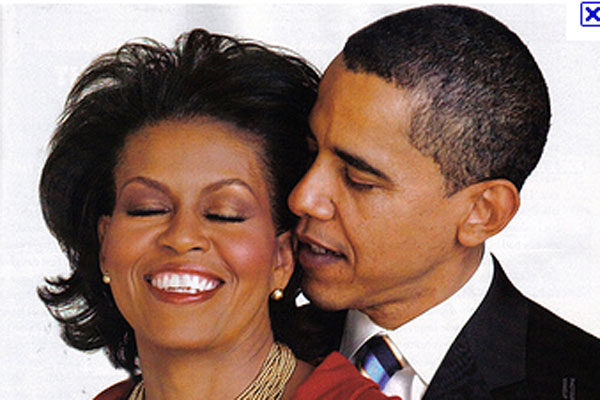 I won’t stoop to the level of the radio host who compared Michelle Obama to Chewbacca.  And I damn sure won’t do a split screen of one of the most educated, eloquent, admired, respected, beautiful black women in the world with some character from Star Wars like I saw on other news sites.  All I can say is nothing in this world gets me more upset than when a person from another culture dares to strike down a black woman on a standard of beauty.

Well, have you ever heard the saying, “Everyone has a voice, but not everyone deserves a microphone?” Well the microphone given to “conservative” radio show host Jimmy Lakey needs to be snatched away immediately!

On his Colorado Springs-based station, 740 KVOR, Lakey told a story about how someone at his “cigar club” made a comment about Chewbacca, and everyone in the room automatically knew the reference was about the first lady.  Let’s stress that again – First LADY—and a well-respected one at that!

Lakey goes on to tell his listeners he performed his own little test of the comparison and many felt the same.

“Everyone drew the conclusion. And I’ve tested it—I’ve done group testing and I’ve said if I say Chewbacca, what do you think,” he said.

Then he tried to clean it up (of course he did…NOT) saying, “I have never used it on my own. I think this is crass and a little bit much.”

Sure, Lakey, we believe you.  So instead of using it on his own, he just “decides” to spread that silly insult via the AIRWAVES to all his listeners, who can then pass on the joke.  Wasn’t that responsible of him?

And it didn’t end there.  He also got his wife in on the insult.  “Mrs. Lakey” — who, by the way IS NOT a “First Lady” or by the looks of it has any chance of ever being one thanks to her and Hubby’s ideals — said that to her, Mrs. Obama looks like a football half back.  It must be mentioned that Lakey ran for Congress in 2010 against Dem Rep. Ed Perlmutter, in Colorado’s 7th district. He eventually dropped out of the race.

Sorry to disappoint you Mrs. Lakey, but many women would kill to look half as good as this beautiful mother of two.  Michelle looks good by any standard…obviously, just not YOURS.

“Chewbacca! I didn’t say it! No! I will not take the heat on this. I did not call her Chewbacca. No. I get in trouble. My wife, when I told her this, she yelled at me. I thought it was kind of funny,” a laughing Lakey said.

Sorry, we don’t get the joke.

“I know that’s cruel but it’s OK – it’s cruel for her to talk about my hamburgers that I want to eat all the time,” Lakey said trying to explain away his foolishness.

Sorry again, we don’t buy it.  Comparing a woman to a fictional, apish movie character versus her campaigning to get the world fit ..IS NO COMPARISON!

Sadly, there will always be people like the Lakeys who feel they can attack a person of color, their appearance, their stature—and do so in a public forum for the world to hear. But what’s even more shocking is the people they are attacking is the people at the helm of this country right now.  America will continue to be a sinking ship as long as foolishness like this is allowed to exist.

We at Lip Service:  News with Attitude salute you Mrs. Michelle Obama, and when we see the Obamas, we see nothing but love:  love for each other and love for a country where some narrow-minded people practice disrespect.

And for the Lakeys, we leave you with a poem from Maya Angelou; another black woman.

You may write me down in history
With your bitter, twisted lies,
You may trod me in the very dirt
But still, like dust, I’ll rise.

Does my sassiness upset you?
Why are you beset with gloom?
’Cause I walk like I’ve got oil wells
Pumping in my living room.

Did you want to see me broken?
Bowed head and lowered eyes?
Shoulders falling down like teardrops.
Weakened by my soulful cries.

Does my haughtiness offend you?
Don’t you take it awful hard
’Cause I laugh like I’ve got gold mines
Diggin’ in my own back yard.

Does my sexiness upset you?
Does it come as a surprise
That I dance like I’ve got diamonds
At the meeting of my thighs?

And I am sure he can google the rest……..

Listen to Part I of the on-air insult, courtesy of Youtube

Listen to Part II of the on-air insult, courtesy of Youtube