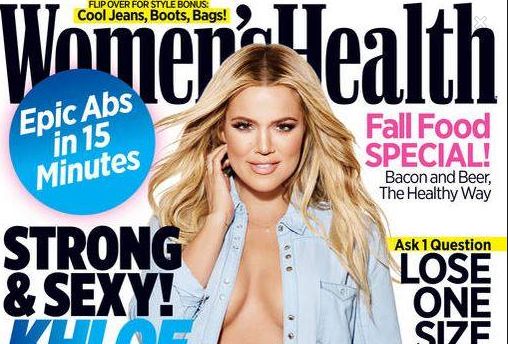 Khloe Kardashian shuts down all the haters with her super hot “Revenge Body.” She’s sending deuces to all the critics who once labeled her “ the fat one.”

The “Keeping Up With The Kardashians” star graced the cover of Women’s Health, wearing nothing but an open shirt and panties. Yas!!!! Khole is flaunting her new body and turning heads while doing it.

In the latest issue of Women’s Health, Khloe was very frank on what ignited the decision to lose 30 pounds.

“It started around 2012,” she told the magazine. “I was having a hard time with [husband at-the-time NBA star] Lamar [Odom]. It was toward the end of our union, and there was so much drama. I needed a release. At first it was so hard. It was baby steps, but I started feeling so much better.”

The reality star hit up longtime friend and celebrity fitness trainer Gunnar Paterson to whip her into shape.

When ET spoke with Gunnar about Khloe’s workout plan he said, “Khloe’s an animal…No complaining, no bitching, just gets after it.”

Khloe recently shared unretouched photos to put to bed all the nonbelievers. You can now pick up your jaws; this Karsdashian’s body is authentic.