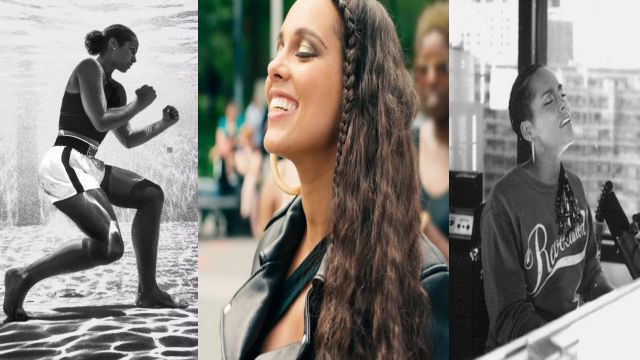 Alicia Keys has “A Revelation” and opens up about sexuality, hiding self

But what if you were a talented young woman, uncomfortable with “putting it all out there”  in order to get that big break?  Enter — Alicia Keys — who has been somewhat of a beautiful enigma of “is she / isn’t she” since she exploded onto the charts wearing fedoras and cornrows, with glossy lips and a tomboy swag.

That swag confused many of us, but Ms. Keys – the mother, the wife and the blockbuster performer — clears it all up.  In “A Revelation” blog written on her personal website, AliciaKeys.com, the singer talks openly about her personal style and the body image issues she struggled with in the early days of her career.  It was something that dated back to her childhood.

“For as long as I can remember, I’ve hidden myself. It might have started in school when I realized that I caught on to things a little quicker, and teachers started to show slight favor to me, or use me as an example. I remember feeling like my friends would make fun of me or look at me as if I was different from them and so… I started hiding. Not intentionally, I didn’t mean to, but I did. Little pieces at a time”

“I definitely started hiding when I got old enough to walk down my NY streets alone. I started to notice a drastic difference in how men would relate to me if I had on jeans, or if I had on a skirt, or if my hair was done pretty. I could tell the difference, I could feel the animal instinct in them and it scared me. I didn’t want to be talked to in that way, looked at in that way, whistled after, followed. And so I started hiding. I chose the baggy jeans and timbs, I chose the ponytail and hat, I chose no makeup, no bright color lipstick or pretty dresses. I chose to hide. Pieces at a time. Less trouble that way.”

“I remember feeling that same way when I first started to get recognized as an artist. I had the baggy/braided/tough NY tomboy thing mastered, that was who I was (or who I chose to be) and I felt good there. Then, because of the way I spoke or carried myself, people started calling me gay and hard and I wasn’t gay, but I was hard and although I felt comfortable there, it made me uncomfortable that people were judging me and so slowly I hid that side of myself. I put on dresses and didn’t braid my whole head up, so people could see more of the “real” me, even though at that point I’m sure I was more confused then ever of what the real me was.”

Keys eventually “found herself” and love, marrying friend and producer Swizz Beatz and giving birth to two sons.  Still, the mom finds herself questioning simple things and worrying about her public image.  She has to, sometimes, remind herself to stop.

“OMG! Alicia!!! Why are you choosing to be that person?? That is so old and outdated!! STOP!!” she wrote.

Then she said the things that ALL women need to hear..and tell themselves: