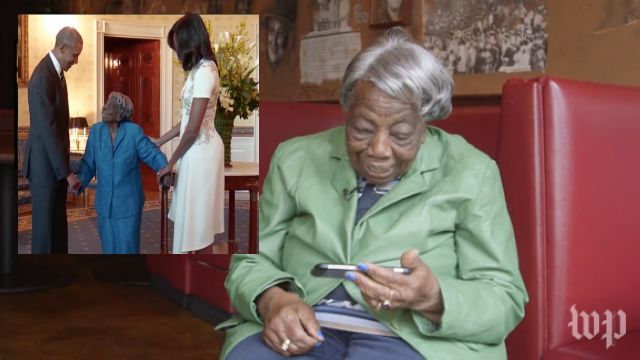 106-year-old woman watches video of herself meeting president: I can die smiling now

“This is really nice.  Yeah, that’s us. My goodness,”Virginia McClaurin said as she watched video of herself meeting President Obama.  It was the first time she was ever shown the footage.

“This is really good  We standing there together,” McClaurin told the Washington Post.

And yes, while for so many of us who have been through so many things, meeting the president would be an awe-inspiring moment.  We dream of him walking into our favorite restaurant and casually ordering tacos or burgers while we snap cellphone pictures and hope that he would shake our hands.

In this generation of Millenials, it is cool to see a president with swag, who looks impeccable in tailored suits and aviator glasses stepping off Air Force One, who brings “Blues” to the White House and who does chill factor appearances on late night TV shows.  He is the president of a new generation, up with the times and advancing technology.

But for McClaurin, he is black, and so is his wife, and that is all he needs to be.

Jesse Jackson once said “Hands that once picked cotton can now pick presidents.”

And that is the part of the humble beginnings of McClaurin.  At 106 years old, yes, she’s picked cotton, and no, she could not eat in the same restaurants as white people when she was younger.

Her generation fought to desegregate schools and for the right to vote.  Her generation thought they’d never see the day a black man controlled the Oval Office.  She’s outlived most from her generation, but her moment of a lifetime stands for them all.  The day she met the FIRST BLACK PRESIDENT.

The video went viral of “Sweet Virginia” excitedly hugging President Barack Obama and First Lady Michelle. And the footage of her seeing herself meeting them, is just as sweet.

“I was so happy to meet the black president and his wife was so nice. I can die smiling now,” she said.

We love you Mrs. Virginia McClaurin! Keep on dancing and smiling.

Want to see the original video? Here you go and grab your tissues!