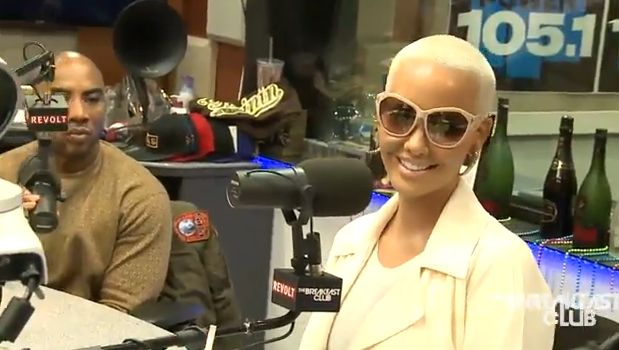 The problem with Instagram, Red Carpets and quick little Papparazzi photographs is that they paint a distorted picture of a person..and most often, we get the wrong impression.  Such as the case with Amber Rose.

I, like so many other women, can honestly say I have always been spellbound by her beauty…but thought that her public persona gave her a little bit of the “overly sexual” and “inappropriate for younger audiences” reputation.  Perhaps.

However, after LISTENING to her interview on Power 105.1’s The Breakfast Club with Charlamagne Tha God, DJ Envy and Angela Yee, I love her spirit just as much as I love her beauty.  And the down-to-earth sistah ain’t half bad!

She opened up about the pain of her breakup/ separation from husband Wiz Khalifa, the prospective “new boo” James Harden of the Houston Rockets and a little tea, no shade on her ex-boyfriend Kanye West, who brought her into the spotlight for many of us.

Here are a few of our favorite excerpts:

“Just because you’re a mom doesn’t mean you don’t have to be sexy anymore.  You’re not a granny. I’m 31, I’m still young and I’m still in my prime.”

Amber admitted that she definitely has changed..and it seems for the better.

“For sure, I became a mother.  I’m not at the club every night downing shots.  My priorities definitely did change.”

Amber says she doesn’t go to strip clubs anymore for one good reason.

On waiting on Wiz Khalifa and deciding to move on:

“I’m a serial monogamist.  I can focus on one person when I really care about them.”

“Like dancing on Chris Brown at the club.  It’s like I’m being petty but not with someone I have potential to be with, you know what I mean. I didn’t do it on purpose.  But it was like ‘Fuck it, I’m going to have fun.'”

“The man that I married that I know, is not the guy I seen him becoming.”

“Ideally, I would want him to come home and we could start over. But now I am kind of at the point where, you know, I waited for him. I did, even after I filed and everything, I still waited for him to come home. He never came home. And there comes a point where like you know what, I can’t be lonely every night.  I can’s sit around and wait for him to grow up, I just can’t.  You know I have to move on.”

How did she cope?

“I listened to alot of Alanis Morrisette, a lot of Trina.  God bless you Trina.  (who, by the way used to date James Harden.)

On James Harden and if he would get a Valentine’s day surprise:

“Me and James have a special friendship.”

“What drew you to him because he does have a reputation? — Yee asked.

“We all have reputations.  You have to understand.  I met him in Vegas a month ago and we just had a conversation where it’s like…we just developed a really good friendship…He’s an amazing guy.”

On Kanye West and Kim Kardashian:

“She has the potential to be really dope, but to me she’s not.  It has nothing to do with Kanye.”

“They are a match-made in Heaven, for sure.”

“Dancers, we have a lot of confidence.  We don’t hate on eachother. Like we praise eachother.”

Rose has a role in the upcoming movie Zoolander 2, is participating in a sketch comedy, previously had a part on ABC’s Selfie, and another role in Sister Code. She also has a sunglass line and is releasing a self-help book of sorts, “How to be a Bad Bitch.”

And how does she keep that fresh face?

She says she washes nightly with Clinique’s mild face wash, uses Clinique toner then covers her face with Nivea Cream, later removing it with a warm towel.

See the entire interview below: