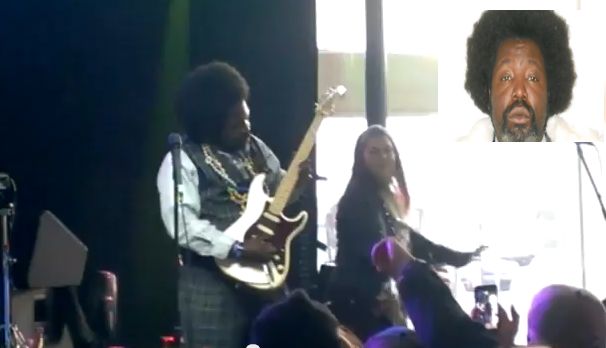 Afroman knocks the hell out of female fan on stage

Oh my goodness!  I guess Afroman does not like anyone in his space.  The rapper, known best for his 2000 hit “Becaused I Got High,” was not feeling it when a female fan hopped on stage while he was performing…so what did he do?  He knocked the heck out of her!

He literally just turned around and punched the woman in the face, knocking her to the ground.

Biloxi Police Department arrest report read, “On 17 February 15, the Biloxi Police Department responded to a reported assault at the Kress Live Entertainment Venue involving Mr. Joseph Edgar Foreman who performs under the stage name Afroman.  Mr. Foreman was arrested for Assault as a result of a Citizen’s Affidavit, booked in, and released after paying a 330 Dollar Bond.”

“My understanding is (the woman) got up on stage, and he hit her,” Police Chief John Miller told the Biloxi Sun Herald.

Wednesday afternoon, Afroman apologized for the incident, telling “TMZ Live” that he’s going to be “enrolling in an anxiety foundation right now.”

Say whatttt????? This man certainly does need some help.  Come on now!

Check out the video below..and say “Damn, was it that serious!”