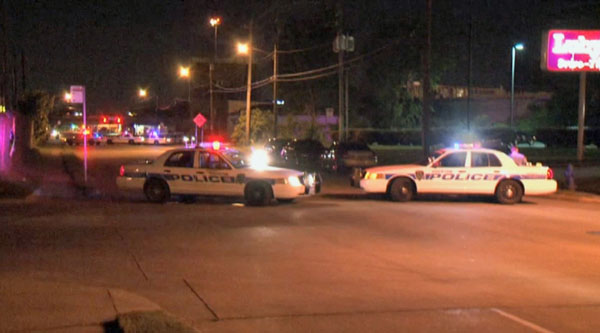 HOUSTON—A suspect tried to rob the wrong group of men Wednesday night, and that mistake, cost him his life. The men were a trio of undercover police officers, who turned the tables on the suspect after being ambushed outside a restaurant in southeast Houston.

Houston police said the suspect first tried to get inside a Taco Bell in the 900 block of Wayside around 10:30 p.m., but the doors were locked. Employees called to report the man outside with the gun, but the suspect had fled by the time police arrived.

The suspect continued on in search of another target.

That is when he spotted three men behind a Luby’s in the 5300 block of the Gulf Freeway about 30 minutes later, but these were no ordinary men.

The men were three undercover narcotics officers who were meeting behind the restaurant for a debriefing on an operation. They were wearing shorts, baseball caps and no badges, appearing to be everyday citizens.

The suspect—who was wearing a bandana and white gloves—jumped from behind some bushes, aimed his automatic pistol at the officers and demanded money.

At first the officers thought it was some kind of joke, then they realized they were actually being robbed.

The officers complied with the suspect’s demands and started emptying their pockets, but their instincts and police training kicked in.

“One of the undercover officers is engaging him in conversation. Another officer is trying to go behind a vehicle, because at that point they’re fearful that all three of them are going to be shot and killed by the suspect,” said John Cannon, Houston Police Department spokesperson.

When the suspect noticed one of the men had moved, he threatened to shoot one of the others.

“He was steadfast the way he was pointing the pistol specifically at one of the officers, and he was yelling at the other officers that, ‘If you don’t come out from behind the vehicle, I’m going to shoot him right here.’ So he meant business, and obviously did not know he was dealing with police officers. He picked three wrong guys to try to rob,” Cannon said.

The officer behind the car remained in position and opened fire.

The suspect shot back once, which prompted the third officer to open fire as well.

The suspect was hit several times and died at the scene.

None of the officers was hit.

As standard procedure, the officers were ordered to serve a few days of desk duty and will undergo psychiatric evaluation before returning to normal duty.

“Officers are basically given up to three days of administrative duty, and in so doing, they also are set up a meeting with psychological services because, believe it or not, it takes a toll on officers mentally. The last thing they want to do is discharge a weapon,” Cannon explained. “It’s not a punishment of any means. It’s basically to say, ‘OK, let’s make sure your head is clear for a few days and make sure you’re ready to go back to your respective duty.’”

One of the two officers who fired at the suspect has been with the department since 1983.  The other joined in 2000.

Click here to see the RAW VIDEO at KHOU.COM