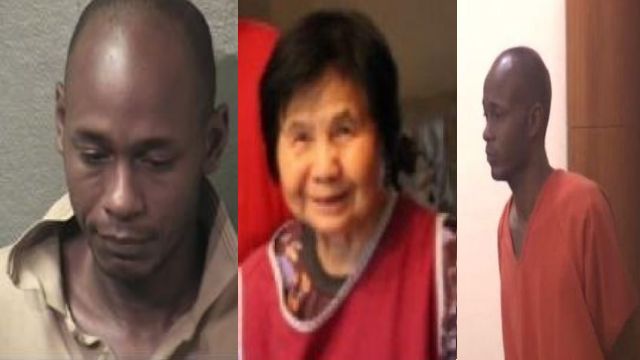 HOUSTON – A man accused of fatally stabbing a 79-year-old woman in the Sharpstown area was arrested Friday after assaulting his own mother while she was sleeping in her bed, according to Houston police.

Cavales Prater, 35, has been charged with capital murder in the death of  Su-Jung Teng.

HPD Homicide Detective Robert Klementich described Teng’s brutal murder and what led to the capture of the suspect during a press conference Tuesday afternoon.

Teng was killed April 29 in the 7800 block of Hiawatha. The woman was gardening when a suspect, now identified as Prater, entered through the back gate of her home and crossed paths with her in the garage.  Police said Prater said nothing as he began to beat the woman with a golf club as she tried to run for her life. The brutal attack continued as Teng ran into her house, ending in the bathroom where she was fatally stabbed with a pair of scissors, police said.

Teng’s elderly husband tried to protect her, but he was no match for the violent suspect.

“Mr. Teng tried to rescue his wife.  He was very brave and he tried using multiple items to protect his wife,”  Klementich said.

“I was reading the newspaper, right in the kitchen, and I heard that screaming. I could barely hear the screaming noise because of the garage door,” Teng’s husband told KPRC 2.

Prater fled the scene after the attack, leaving the community shocked and on edge.

Investigators suspected that Teng’s murderer was a homeless man who neighbors had spotted in the area earlier that day.

Prater remained on the loose until Friday, when he was arrested for attacking his mother, police said. An observant HPD officer connected the crimes.

Police said Prater broke into his mother’s north Houston home on Friday morning, went upstairs and began to choke her.

Prater was taken into custody and charged with assault/family violence.

During his arrest, Prater was wearing a long-sleeved shirt that matched the description of the one worn by the man accused of killing Teng, police said.