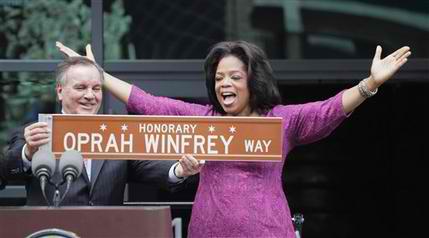 CHICAGO  — What do you give a woman that already has her OWN – network and everything else money can buy, that is?  The answer is simple…you give her what she gives the world – LOVE.

Mayor Richard Daley did just that Wednesday when he announced “Oprah Winfrey Way” would be the new name of the street outside Harpo Studios.

It was of one of Daley’s last official acts before he leaves office next week after 22 years of service.  He honored the talk show Queen in a street-filled ceremony before she officially ends her show after 25 years of crying, sharing, celebrating, living and loving each and every one of her fans, oh yeah- and giving away a bunch of great stuff, too.

Aside from the generosity and gift-giving, Winfrey has been widely credited with helping to transform the former gritty part of the city into a thriving neighborhood, as her beige building with the giant silver ‘O’ proved to be a magnet for young professionals and families.

Winfrey is the latest of more than 1,000 celebrities, religious leaders and activists to be honored by the city, joining others like Michael Jordan, Siskel and Ebert, Hugh Hefner and Frank Sinatra.

Winfrey said having a street named after her was “better than an Oscar or an Emmy.”

“It is really just a full circle, miracle story,” she said, “that a little colored girl born in Kosciusko, Mississippi, on a red dirt road ends up with my name on a street in the greatest city in the world, Chicago.”

Not bad little black girl, not bad at all.