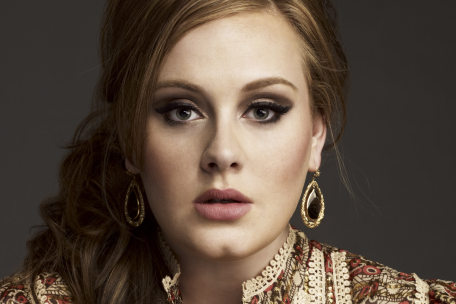 Talk about a “What the friggin’ heck is going on” moment!  British singing sensation Adele, who has proven herself to be a bonafide crossover star in America, is being asked for a portion of her song royalties by non-other than….drum roll please …. her EX-BOYFRIEND!

Now, just to be absolutely clear, Adele’s ex boyfriend claims he was the inspiration behind the heart-wrenching songs on her debut album, ‘19,’ and thus, deserves some of the profits.

So hmmm, you hurt me, rip my heart in two and when I release my pain through my songs, you want to get paid?  Yes, that is what he wants.

“For about a week he was calling and was deadly serious about it,” Adele told The Sun.  “Finally, I said, ‘Well, you made my life hell, so I lived it and now I deserve it.’”

The songstress, who in my opinion digs into the depths of her pain when she belts out tunes like Cold Shoulder, Melt My Heart to Stone, Chasing Pavements and (my new favorite) Rolling in the Deep, told him where to take it and showed she was not taking his crap anymore.

“He really thought he’d had some input into the creative process by being a pr**k. I’ll give him this credit – he made me an adult and put me on the road that I’m travelling,” she said.

Following the epic success of her latest album, ‘21,’ her 2008 album shot back up on the charts, which prompted the ex, whom Adele refuses to name, to come out of the woodwork and try to cash in on her good fortune inspired by a bad situation—that he proudly takes credit for—the nerve!

Well, she doesn’t appreciate it and I am sure that anyone who’s ever suffered a broken heart will agree.

Most artists draw from life experiences.  Have you ever listened to a Country or R &B song? You can learn more about jilted women and cheating men from the people with those southern drawls or midnight melodic souls, rappers talk about the streets and who can ever forget Alanis Morissette’s You Oughta Know from her Jagged Little Pill album.

The muse for that earth-shattering tune was non-other than comedian Dave Coulier (Uncle Joey) from the sitcom “Full House”.  You think he got paid?  No!  He just got the privilege of being named someone who was deemed “hot enough” to break a heart.  He is a cutie, though, in a sweet way!

On a personal level, I was procrastinating on starting this site, always pushing back my launch date because I was juggling my full-time job and other everyday life occurrences. Then guess what, the pain I felt from a rebound relationship after my divorce got my creative juices flowing.  Instead of moping around over something I could not control, I put myself first again, picked up my trusty notebook and did what I did best—express myself.

Come to me with a hand out, and draw back a nub — I’m just saying.  Hey, don’t judge!  Sometimes a subject hits close to home and we prove why we are Lip Service:  News with ATTITUDE!

Now check out Adele’s song “Rolling In the Deep” via Youtube!