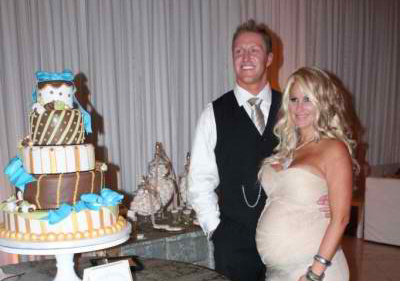 ATLANTA — Real Housewives of Atlanta’s Kim Zolciak and her beau, Atlanta Falcons player Kroy Biermann hosted their baby shower in downtown Atlanta Sunday.  The shower, which was held at the Grand Atrium, was an extravagant affair and the mommy-of-the-hour was simply fabulous wearing Rafael Cennamo and Guiseppe stilettos.

“Huge thank you to my love Kim Zolciak for such a special and wonderful baby shower for our son!”  Biermann tweeted following the event.

Other “Housewives” in attendance included Phaedra Parks and Kandi Burruss, but sources said NeNe Leakes was not invited.

Photos of the lavish affair were shared with the public.

“Wow I invite a “friend” to the shower and she releases pics to the press!” Zolciak complained via Twitter. “Unreal!”

Tami Reed of Talking with Tami attended the soiree and posted pics on her website.  Reed said her photos were approved to be released, so we decided to share those with you.

Here are some of the baby shower photos via talkingwithtami.com.  For more on the event, visit Talking with Tami’s website.