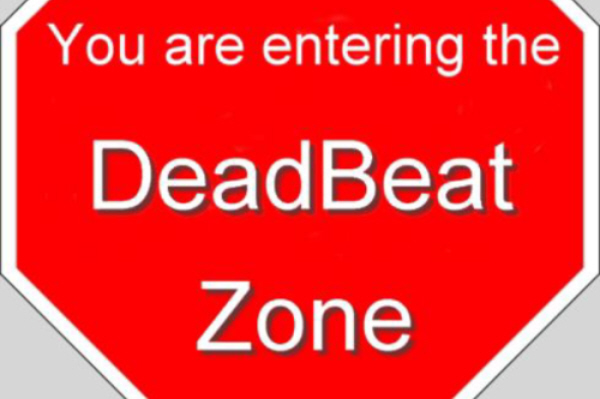 Most of the dating nightmares I write about are drawn from personal experiences and when I ran across this article about the 5 Signs You’re Dating a Dead Beat, as usual, I could relate.  Can you?  Check out the article via Seek Wisdom, Find Wealth:

On the surface a lot of guys can come across as “ballers,” but it’s up to you to be alert and pay attention to the waving red flags that make it clear this stud is really being a bum with his money. Before dating becomes “I do,” look for these warning signs and clues. If you find them – run—or go through some serious counseling before walking down the aisle! Remember, most marriages end over financial disagreements, but be clear that people who enter marriage with bad money habits don’t magically begin them because they’re married. They were showing signs all along!

Red Flag #1: He drives a big flashy car and lives in a fly apartment – the one he calls a “condo” – in the ritzy part of town, but his furniture consists of a futon and one flat screen television. Okay, if he moved in last Saturday, then we can give him a pass, but if he’s a grown man and he’s been there longer than 30 days with no real furniture, chances are he’s not the baller you thought he was. The only thing worse would be him living in a fully furnished home. . . with his mama!

NO DÉCOR, NO FOOD, NO CLEAN TOWELS – BEEN THERE…DONE ALL OF THAT…NOT GOING THERE AGAIN!  A MAN ACTUALLY ONCE INVITED ME OVER AND HAD NOTHING BUT TAP WATER TO DRINK…REALLY?

Red Flag #2: When you met him, he was buying out the bar at the club. But, every time you come to that empty apartment/condo, his refrigerator is just as bare, with the exception of the Arm & Hammer  Baking Soda he uses to keep the ice fresh. Be leery of anyone who is so concerned about impressing complete strangers on Saturday night, he’ll starve for the rest of the week.

I DATED A MAN LIKE THIS ONCE….MADE A FOOL OUT OF HIMSELF “FAKE BALLING” AND BUYING EVERYONE DRINKS IN THE CLUB…THEN WOULD HAVE AN “ATTITUDE” WITH ME THE NEXT DAY AFTER HE WOKE UP BROKE…UMM, BYE-BYE!

Red Flag #3: Have you ever seen him get his mail out of the mailbox? If you answered “No,” be concerned. He can’t be in control of his finances if he’s ignoring his mail. Someone who has their finances together won’t want to run the risk of missing something important. On the flip side, if he does get the mail, but the contents are always pastel colored envelopes that read “URGENT” or “PAST DUE” across the front, you should still be concerned. That is a pretty standard clue that someone is having trouble paying their bills on time.

I DATED A GUY WHO TOLD ME HIS CAR WAS “ACCIDENTALLY” ON THE REPO LIST BECAUSE THE CAR SALESMAN “LIED” AND TOLD HIM HE DIDN’T “HAVE” TO PAY A NOTE FOR THE FIRST 6 MONTHS, THE FINANCE COMPANY DIDN’T BUY IT…AND NEITHER DID I.

Do you want to know the other two Red Flags?  Check them out at Seek Wisdom, Find Wealth.