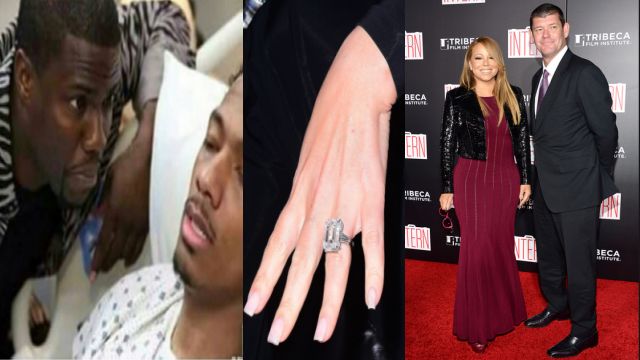 Nick Cannon is taking his ex-wife Mariah Carey’s engagement extremely well, and of course in a comical way. Cannon is, after all, the creator and host of the hit show Wild ‘n Out, so what did you expect?

Cannon extended his congratulations to Carey and her new husband-to-be, Australian casino billionaire, James Packer, thru Instagram. He shared a trending meme of himself in a hospital bed with Kevin Hart from BET’s Real Husbands of Hollywood kneeling beside murmuring “It’s just a ring,” into his ear.

Cannon wrote in the caption,

“Ha! This made me laugh out loud for real!!! HILARIOUS! #AllLove Congrats to @MariahCarey and James! May God Bless Your Future Union… #GreatPeople #GreatCouple.”

Packer got down one one knee and proposed to Carey with a 35-carat diamond and platinum ring at a romantic private dinner in New York apparently she said “yes.”

Things moved pretty swiftly for Packer and Carey. The couple began dating last May and moved in together five months after that. It is said the couple “fell head over heels in love with one another,” as soon as they started dating.

Cannon and Carey separated in August 2014 after a six-year marriage which produce twins Moroccan and Monroe. In late 2014 Cannon said, “I would never say anything negative about Mariah, we are forever a family rooted in love.” As of now he is indeed a man of his word.

Congratulations to Carey and Packer, and a round of applause for Cannon on his positive social media reaction. We wish you ALL – all the best.