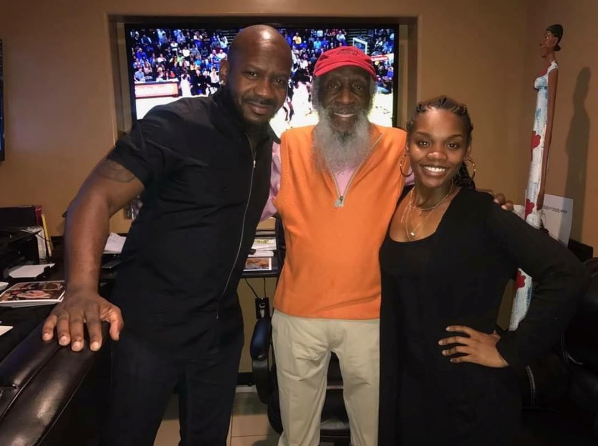 The laughter and the lesson: Dick Gregory shares history, lots of words of wisdom

News With Attitude received a history lesson for the books as we were able to talk to the one and only Dick Gregory. The actor, comedian, activist (to name a few titles) gave us the real on his relationship with Martin Luther King, Jr., Medgar Evers, and what it meant to stand up in the face of adversity during the Civil Rights era. As Gregory poured into us, we identified with the amazing wisdom that was so rich, it oozed out of him.

Although Gregory was great friends with King and Evers, two legendary Civil Rights activists, he said that they didn’t necessarily “teach” him anything, because he simply “had it” in him, just as these great men had it in them to fight for justice and equality. “I was willing to die. When I was there, I didn’t go there to tell no jokes. When I come here, I don’t come here to liberate nobody. It’s an insult if I think I’m gonna free you from something up on that stage… but we don’t wanna die for us,” he explained. “It’s just a matter of are you gonna be a soldier or not?”

The irony in Gregory’s statement is that this man has freed more people on that stage than he realized, even if we did laugh until our stomachs began to hurt.

Something also interesting that we noticed about Gregory was that although he has done numerous remarkable things in his lifetime, he doesn’t consider it to be as big as others have perceived all of it to be. When asked what he felt was the most trailblazing thing he’s ever done, his humble, yet simple reply was “Nothing.” He said, “The same God that made me made Einstein… I can’t make a kneecap. I can’t make a toe. So why am I so great? It’s just one thing that supersedes everything…”

When asked to stress the importance of Black History, Gregory said “All of us are Black History, even if we don’t do nothing… If you don’t know that you made everything, then I’ve got to find me something to believe in… As long as there’s anybody on this planet, they remember who King is. They remember what he did.” As many of you know, this is a man that truly believes black people are the most powerful people in the world, even if we may not always realize that power.

For over 20 minutes, Gregory told us so many things that blew our minds, but something that he expressed, both on and off stage, gave us all an eerie feeling. Gregory revealed to us that Martin Luther King, Jr. suffered from paranoia due to the idea that he knew he would one day be killed. While at a club, Gregory said somebody came up behind him and said “They’re gonna kill me, aren’t they?” His reply, one of humor, was, “They’re gonna kill us all. Better you than me! Come on, we’ve got a show to do.” Three weeks later, the preacher from Atlanta was shot on a hotel balcony in Tennessee. The murder of his friend is still something that Gregory has certain doubts about to this day.

It was truly an honor to be able to absorb so much knowledge from such an important figure in our history– Black History.