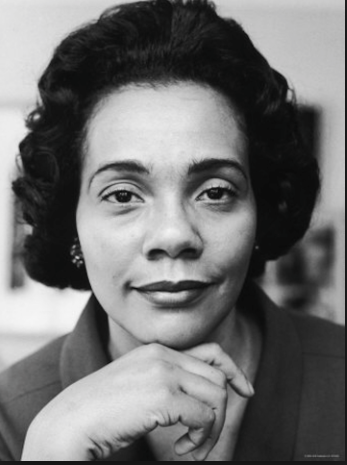 Civil Rights activist and wife of Dr. Martin Luther King, Jr., Coretta Scott King, was born on April 27, 1927 in Marion, Alabama. Coretta was the third of four children in her household.
At a young age, Scott and her siblings were expected to receive the highest education. Due to her parents’ lack of education, they demanded that their children did not replicate their education level. Scott’s mother, Bernice, stated, “My children are going to college, even if it means I only have but one dress to put on.”
Coretta and her siblings attended a one-room elementary school that was 5 miles away from their home.  In the later years, they attended Lincoln Normal School, which was 9 miles away from their home and was the closest black high school in Marion, Alabama due to racial segregation in schools. In 1945, Coretta Scott graduated as valedictorian in her senior class at Lincoln Normal School.
Years later, Coretta decided to transfer colleges to further her education and passion for music. Transferring from Antioch College to New England Conservatory of Music in Boston, Massachusetts, Scott met Martin Luther King, Jr. King knew instantly that Coretta Scott was meant to be his wife. A year later on June 18, 1953, the couple was officially married.
After 15 years of raising 4 children, participating as activists in the Civil Rights movement, and spreading awareness of equality, Dr. Martin Luther King, Jr. was assassinated on April 4, 1968 in Memphis, Tennessee. Coretta Scott King did not allow her husband’s dream to die. Coretta and her family sought to carry out his dream and make the world an equal and safe place.

Through her hard work to gain equality in the African American community and the LGBT community, Coretta Scott King fought hard for human rights for many years. Due to her old age and suffering from ovarian cancer, Coretta Scott King died on January 30, 2006.
Even though her and her husband’s passing devastated the world, they left behind an unbelievable gift to others– the message of equality and acceptance.