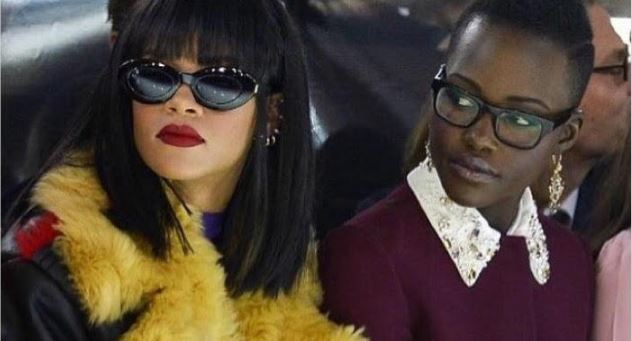 Never doubt the power of social media! Thanks to Twitter, it looks like there could actually be a chance of a new film starring Rihanna and Lupita Nyong’o, produced Ava Du Vernay and written by Issa Rae made.

Last week, a picture of Rihanna sitting alongside Lupita Nyong’o during Miu Miu’s 2014 Paris Fashion Week resurfaced on Twitter with the captain, “A picture from the history books.” @1800sadgal responded to the tweet with a description of the picture, “that sounds like a great movie plot for the duo.”

Rihanna looks like she scams rich white men and lupita is the computer smart best friend that helps plan the scans https://t.co/PhWs1xd3nj

Lupita must have loved the idea of this film being based on the art of conning because she tweeted Rihanna letting her know that she is down for it and of course Rihanna replied, “I’m in Pit’z.”

Once the Twitterverse fans saw this, they went crazy and started chiming in on who else should be involved in this film.

@CarrieCnh12 suggested adding the director of “13th,” Ava DuVernay, to bring us some #blackgirlmagic. Next on the list, Twitter summoned creator of HBO’s “Insecure,” Issa Rae who responded with a GIF of a kitten typing extremely fast on a Macbook.

Is this a film that you would want to be brought into fruition?

Check out some of the tweets!

Time to scam in full glam! Came up with fashion looks for this unconfirmed #RihannaXLupita movie. @rihanna @lupitanyongo pic.twitter.com/ODuPX3ZGL8

I didn’t know I wanted this. pic.twitter.com/Y20iCOwELR