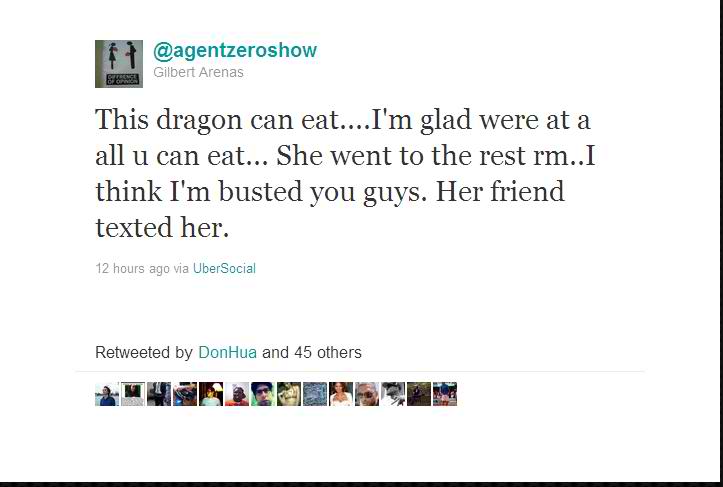 NBA player Gilbert Arenas may have just crossed the threshold from being a deadbeat dad (allegedly) to one heck of a jerk—thanks to the live tweets he sent out trashing a woman during a blind date.

The Orlando Magic shooting guard obviously knows how to throw slugs on and off the court based on the jaw-dropping things he said via his Twitter alter ego “agentzero show” about the woman, ripping her to shreds on everything from her clothes to the way she ate.

Yes, we know Arenas is known for his off-the-wall, sometimes offensive and totally misogynistic tweets regarding women, but some lines just should not be crossed.

We are hoping this was just one big joke or publicity stunt, because if it is not, it would mean Arenas is one first-class ass and maybe Laura Govan’s allegations against him are true.

While most people may think what he did was funny, we at Lip Service:  News with Attitude don’t believe hurting or shaming a woman in any way  is good comic relief.

If you don’t like a person, excuse yourself and keep it moving, but to stay and make her a running joke on Twitter — how rude!

Check out the rest of Arenas’ shocking tweets in the slideshow below: