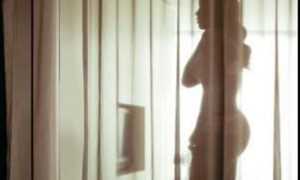 We all learn from our mistakes. Well, maybe.  Apparently, just weeks after a stalker used Twitter to hunt Serena Williams down, the tennis mega-star posted a revealing avatar of herself on the social network Thursday, according to USA Today.

The suggestive photo showed Williams’ curvaceous silhouette through a lace curtain wearing nothing but panties and a bra.  The photo depicted that someone (a Peeping Tom) was spying on her from the outside.

Was that a literal interpretation of “Art Imitating Life?”

A suspect, 40-year-old Patenema Ouedraogo, was just arrested outside Williams’ Florida home in early May and charged with stalking and cyber-stalking.  He admitted he was able to track her whereabouts thanks to her constant tweets to her 2 million Twitter fans.

Harsh criticism deeming the photo inappropriate prompted the star to take the photo down, then put it back up, then remove it again.

It has been a rough year for the four-time Wimbledon singles champ, as noted by USA Today.

Despite her 13 career major championships, she will have her world ranking tumble out of the top 10 next week.

She also had a couple of medical issues recently.  She had two foot operations and she was hospitalized in March with blood clots in her lungs.

It is widely known that stress can alter a person’s judgment and lead one to make questionable decisions.

We at Lip Service: News with Attitude just want Williams to be more cautious when it comes to her personal safety.  There are some crazies out here!