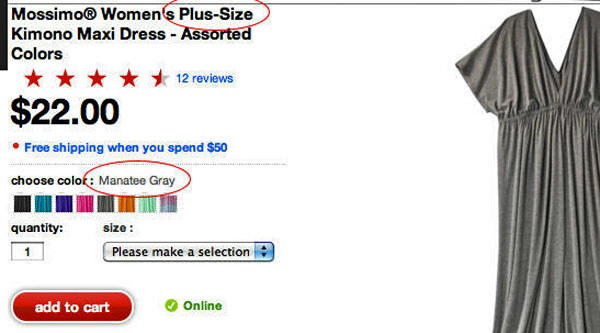 HOUSTON—Target is calling it an “unfortunate oversight,” but many are offended after an online ad labeled the color of a dress “Manatee Gray.” A manatee is a very large sea mammal, also called a “sea cow.”

The problem is, the same dress in a smaller size was labeled “Dark Heather Gray,” leaving some to speculate the “slip-up” was a jab at larger-sized women.

The issue came to light when an observant shopper, @suZen, saw the different ad descriptions and called the store out on Twitter.

“What the. Plus sized women get “Manatee Grey” while standard sizes are “Dark Heather Grey.” @Target #notbuyingit pic.twitter.com/nzHNYoytnp” @suZen

Target quickly tweeted back that they were looking into the matter.

“We apologize for this unintentional oversight & never intend to offend our guests. We’ve heard you, and we’re working to fix it ASAP.” — @Target.

A representative later explained the mistake.

“We apologize for any discomfort this might have caused and are working to update the name of the dress to reflect Dark Heather Gray. This was an unfortunate oversight,” the company said in a statement to Forbes.

The company went on to say that “Manatee Gray” is a color used to describe other Target products. They said the mix-up was a failure to communicate between two buyers.

The customer who noticed the “oversight” said she was not offended or outraged after finding the difference and thanked the store for their speedy response.

“A+ to @Target for engagement. I work w/large brands & appreciate T’s quick & direct response to their customers.” — @suZen

She went on to say that she understands how size and women’s body images are a sensitive subject.

“This whole #manatee thing touched cultural pain points – it’s not about @Target – it’s about how people feel about how they’re discussed.” – @suZen