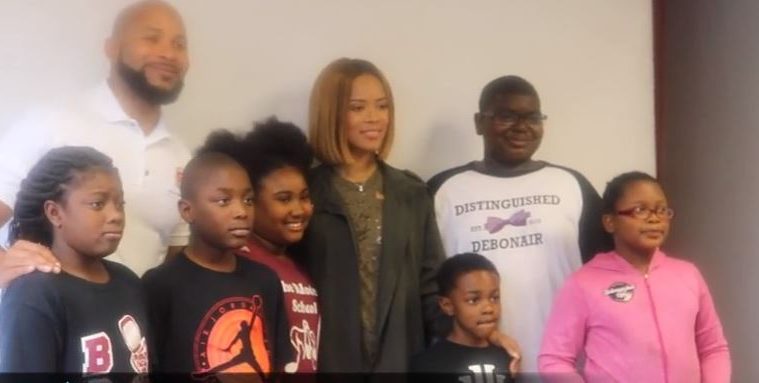 She’s the “it” girl who dominated Wednesday nights on the FOX hit show “Empire” and she visited Houston to encourage our local youth to dream big — and dish a bit on the steamy season involving Cookie and the crew!

Serayah McNeill, aka Tiana Brown, hosted the 3rd annual “INSPIRE ME” teen summit on April 9. The conference, which was held at the D-Spot  Community Center in southwest Houston, featured different workshops designed to equip, educate and expose students to entrepreneurship, job training, and leadership development.

“Why not dream big, is my question,” she said during our interview.

At the tender age of 20 years old, Serayah is well on her way to becoming a household name due to her role on the number one show in America.

She’s what we call a triple threat. Her alluring voice captured the hearts of many and her dance moves and acting abilities help keep viewers and fans glued to their TV screens.

After only a few minutes of speaking with her, it became obvious that she has a heart of gold and a passion for empowering youth in order to break every chain that’s holding them back. Success is limitless.

“Your minds really limit you to the things you can do, and once you figure that out, you realize ‘Oh I really can do this’ and that becomes your confirmation. Once you get to that state you have to keep going,” she said. “My message to the kids is to just dream big and go after whatever that is.”

Of course, we couldn’t let her leave without getting the TEA on this season of Empire.

Drama, drama and more drama was all over the screen, and girl fights!

With Hakeem’s new chick trying to steal Tiana’s shine, she was forced to go head to head with her.

“Hakeem’s girlfriend is opening up for Tiana and she’s not liking that at all,” Serayah said.

However, inquiring minds want to know will “TAKEEM,” Tiana and Hakeem, rekindle their flame this season.

Well, that “Maybe” definitely gave “Takeem” fans hope, but for now, Tiana will be busy touring.

Aside from the music and drama, Serayah shed light on what it’s like to be a part of a show that touches on so many controversial topics that we face in today’s society.

“Along with being a part of the Empire family, I think a lot of the messages they write in the script and put out to the world is really important. From the LGBT community to mental health, it’s really important to see the dynamic of the family and how the Lyons handle it verses how other people in different households handle it. So I think it’s really cool to be a part of something like this.”

As always, America is glued to the tube on Wednesdays when Empire is on, and to Serayah, you continue to GO and GROW girl!