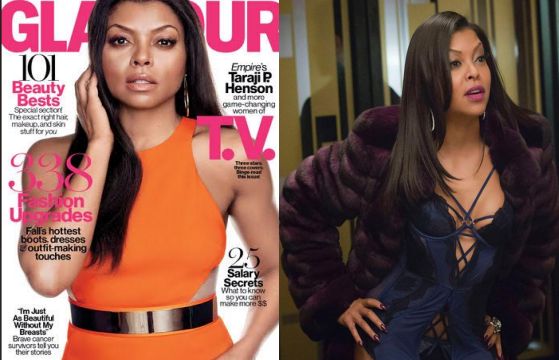 Taraji speaks about racism, motherhood and breaking down doors as Black actress

If you thought Taraji P. Henson was slowing down anytime soon, think again!  Henson was recently in Paris for her screening of the second season of “Empire.”

The audience stood to their feet, clapping, for not only “Cookie Lyon,” but also Henson overall.

Henson says it was then when she realized that as an African American woman, she was breaking down doors for black actresses on television.

She told Glamour Magazine in a recent interview, “The audience stood up on their feet and clapped. I cried because, for so long in Hollywood, I’ve been told that black women don’t do well overseas, that they can’t film overseas. The moment for me was the best moment of my life. That’s better than any trophy, any award, any nomination.”

Henson also spoke about racism today and being a single parent while raising her son, Marcel. She says she vowed to her son to continue acting in hopes of changing racism. She also commented on “Empire” breaking strides in Hollywood, since the show targets topics such as homosexuality and mental illnesses.

Now what takes the cake is Henson shooting back at those who have doubted her from the very beginning.

“When I got pregnant in college, people said, ‘This is it for her.’ But I did not stop. I never missed a class. I was in the school musical when I was six months pregnant—we just made the character pregnant. My mother swears Marcel came out doing the dance; he had learned the choreography. When I graduated, I carried my son across the stage. I wanted to be an actress; I moved out to L.A. with him. People were like, ‘Are you crazy, moving to California with your son?’ My father was like, ‘Leave him home.” I said, ‘I can’t leave my son at home.’ [And eventually] my father said, ‘That’s your baby. That’s your blessing. He’s going to be your strength.’ And you know what? He was. I didn’t have time to go to the club to “network.” That’s B.S. No business deals go down at the club. So I didn’t get caught up in that. I had a mission. I had to make my dream come true. If I didn’t, what was I proving to my son?” she explained.

Henson is the prime example of someone who was dedicated to following their dreams, and using haters as her motivators. Is this what fearless looks like? If so, she wears it very well!