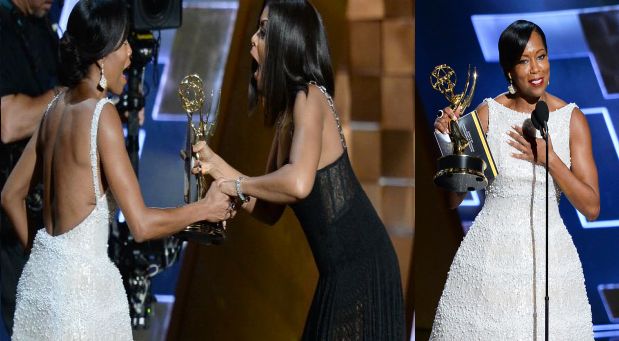 It was a night of victories for Black actresses at the 2015 Emmy Awards, with host Andy Samberg calling it “the most diverse Emmys ever.”

While we celebrated the wins of Viola Davis, Uzo Aduba and Regina King, it was the acceptance speeches that helped bring even more tears.

Taraji P. Henson gasped with excitement before announcing King as the winner for her role in American Crime, and she yelled from the stage after handing her friend the trophy.  A stunned King was full of love as she graciously thanked everyone who has stuck with her throughout her decades-long career, but it was the final person she thanked that made every working mother proud.

She thanked her date for the night, her son Ian, who clapped with pride from his seat.

“The fact that I get to share this night with you, the best date in the house. You make being a mother my greatest accomplishment. Cheers.”

Such a beautiful moment and we congratulate you!

King has an impressive resume, filling diverse characters from her childhood roots as Brenda on 227, to the ’round the way’ girls on John Singleton’s Boys in the Hood and Poetic Justice, to her role as fantastic portrayal of Margie Hendricks in Ray, acting alongside Academy Award winner Jamie Foxx.