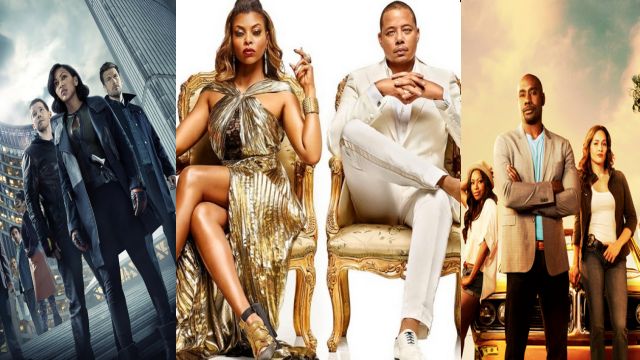 FOX is brewing a star-studded line-up of new dramas, new mysteries, and new thrills this Fall and sneak peeks of the upcoming shows have been released for anxious fans.

Alongside “Empire”, one of the most popular primetime series in the network’s history, FOX will introduce Miami-based investigative series,  “Rosewood” starring Morris Chestnut and the futuristic crime drama, “Minority Report” featuring Meagan Good.
Take a look at the premiere lineup and trailers below!

Set within a world of music, glamour, danger and power, EMPIRE is a drama about a family dynasty that follows the head of a music empire whose three sons and ex-wife all battle for his throne.

As the Lyons slug it out, a battle begins that will either cause the family’s destruction or redemption. Lives and loves will be lost as the complicated family will come together and fall apart over each member’s desire for the elusive throne. Will the family unite and learn to love each other before it’s too late? Love, war, family, sacrifice, money and music: this is EMPIRE.

The future is coming. Based on the international blockbuster film by executive producer Steven Spielberg and the first of his films to be adapted for television, MINORITY REPORT follows the unlikely partnership between a man haunted by the future and a cop haunted by her past, as they race to stop the worst crimes of the year 2065 before they happen. DASH (Stark Sands, “Inside Llewyn Davis”) – driven by his terrifying, but fragmented visions – now has returned in secret to help a brash, but shrewd police detective, LARA VEGA (Meagan Good, “Think Like A Man” franchise, “Californication”), attempt to stop the murders that he predicts. A drama of crime and conspiracy, this is a timeless story of connection: two lost souls, Dash and Vega, who find friendship, purpose and redemption in each other.

Set against the vibrant backdrop of one of the world’s hottest cities – Miami – new medical procedural from executive producer Todd Harthan (“Psych,” “Dominion”), ROSEWOOD is the story of DR. BEAUMONT ROSEWOOD, JR. (Morris Chestnut, “Nurse Jackie,” “The Best Man” franchise), the city’s top private pathologist. Brilliant, cool with tons of charisma, Rosewood teams up with the tough-as-nails DETECTIVE ANNALISE VILLA (Jaina Lee Ortiz, “The After”), to uncover clues no one else sees and help the Miami PD solve the city’s most challenging cases. While she’s impressed by Rosewood’s incredible abilities, his constant optimism is more annoying than it is infectious. But somehow, week-to-week, this unlikely tag team will solve many crimes together.