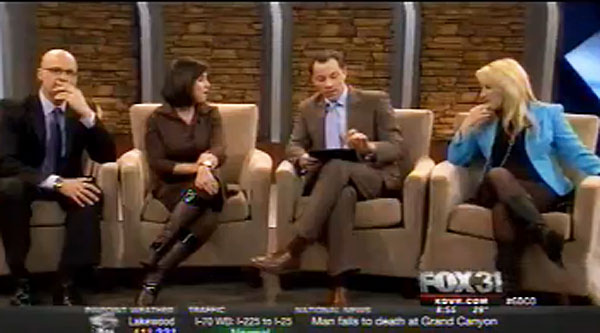 Lord have mercy on somebody’s soul…and say a special prayer to save someone’s job!

This MAJOR accident proves why you should have an EXPERT controlling the social media feeds which should never be accessed LIVE ON TV! You would think that would be something that is Newsroom 101. All social media should be scanned and prepped before airing because it is too unpredictable.

To get straight to the point, KDVR, a Fox affiliate, was covering a tragic helicopter crash in Seattle that killed a former news photographer and a pilot. The chopper had just taken off from a helipad at KOMO-TV station when it crashed in the street (near the Seattle Space Needle) and burst into flames, hitting three vehicles and injuring several motorists.

The Fox News station in Denver was covering the tragedy live and were attempting to show images from the crash when they happened upon someone’s Twitter feed. First there was an image of the crash, the person controlling the feed then moved to the next image, which was of Edward Scissorhands, but still, they kept moving forward. Instead of abandoning the feed, which was clearly not showing any more crash photos, the person moved to the next image, which was of food – not a crash photo – and then onto an oops that shocked the nation. It was non-other than a hanging penis!

The stunned TV personalities tried to remain professional and continued talking about the tragedy through their “oops” faces, but the damage had already been done.

The station later issued an apology and I am sure the person who caused it all will be apologizing for years to come.

See the mistake for yourself…and yes, I warned you in advance.  Lesson taught? LESSON LEARNED! (Note, if the video below stops working, here is a backup link on Deadspin.com.)