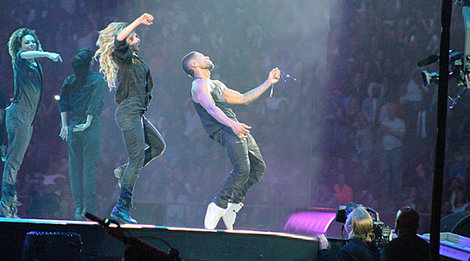 Usher ‘drips’ sexy all over the stage at RodeoHouston

HOUSTON — It was a sea of diversity Friday as every race, age and culture packed Reliant Stadium as R & B and pop superstar Usher shattered Black Heritage Night attendance records for RodeoHouston.

Dripping with sweat and seeming to walk on air (or his tippy toes) at times, “The Voice” judge delivered a high-energy performance mixing moves of the legendary James Brown and Michael Jackson with street-flavor hip-hop as he wowed the crowd of more than 75,000 attendees.

“There was never a dull moment, the show was thoroughly entertaining,” said Rochelle Walker.

The registered nurse flew down from Virginia and purchased tickets to surprise her best friend, who is one of Usher’s biggest fans, for her 40th birthday. The birthday entourage swooned with every other screaming woman, preteen and little girl in the stadium as Usher gave sneak peeks of his six-pack abs and flexed his muscular arms.

“His performance kept me on my feet more than half of the concert and it was the perfect kickoff for our Girlz Nite Out,” Walker said.

But Usher’s performance impressed more than just the ladies.

“Boy, he can really move,” said Brett Daniels, who attends the rodeo every year. The cowboy admitted he was not a “fan” before, but came to the show to bring his 13-year-old daughter and her best friend. “It was worth the money, but I have to admit, I have heard enough squealing to last me the rest of the year.”

And the squealing, yelling and dancing in the crowd only stopped for a brief moment while stage techs changed out Usher’s mic, which went out mid-performance.

Even during the time of technical difficulty, the artist charmed the crowd speaking about how much he loved his “first rodeo,” was amazed by the bull riders and admitted he probably could not even hang with the mutton bustin’ kiddos.

“We family right?” he asked of his fans, then gave the Houston Live Stock Show and Rodeo its props and chuckled affectionately as he prompted the crowd to give him a “Yee Haw.”

The only other blip was when his golden microphone also went out, probably overheating like everything else in the stadium from the sexually-charged and acrobatic moves from Usher and his backup dancers.

“All that glitters ain’t gold,” Usher said, switching to a standard black microphone and getting right back to the performance, never missing a beat.

After revisiting top charting hits “Burn,” (which caused the most stir and appeared to be the crowd favorite)“OMG,” “My Way,” “Twisted” and “Yeah,” Usher wiped his brow, put on his helmet and sped off on a motorcycle, circling the arena and saying his goodbyes to the crowd, while fireworks exploded into the air.

Usher’s performance was another success for Black Heritage Night, which also hosted megastar Beyonce, Alicia Keys, Mary J. Blige and John Legend in the past.

Mary J. ‘tears it up, breaks it down’ at RodeoHouston