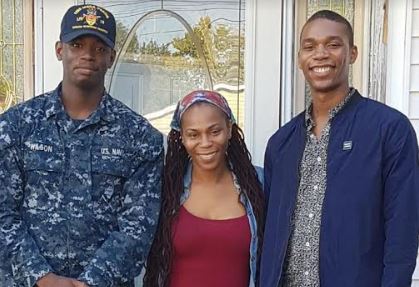 Confessions of a Black Mother

In lieu of having two adult children, I’ve had time to go back and reconsider how I raised them. If I could do it over again, I would have been more emotionally available. My reason for not doing so was  my previous belief that it would “weaken” them if they had gotten used to being treated a certain way and I knew this society would not treat them the same way. I wanted them to have “tough skin” so that they could survive. Unfortunately, in this society, black people are not looked at with empathy and compassion. There is more public outrage when animals are being abused than when a black child playing in a playground is shot by a cop or is killed for walking to a store for candy in his own neighborhood.

My main goals were to make sure they were financially literate, had critical thinking skills, had a strong work ethic, had social skills, knew how to cook, clean and maintain their own living space. I also raised them thinking that if anything happened to me, I wanted the peace of mind that they could survive without me. Tomorrow is not promised to anybody. I thought it was selfish of me to let my kids depend on me for things they could and should be doing for themselves.

When I was in middle school, my parents would give me all of my lunch money on Monday and I would have to budget it to make sure I would eat all week. If I spent it prematurely, I would be hungry for lunch for the rest of the week. I quickly learned to budget, and this skill has helped me throughout my adult life.  So, I taught my kids to be disciplined with money by initially taking them with me to the stores and discussing prices and how to look for discounts and budgeting their money. To this day, they are both frugal and at 25, my youngest bought his first home.

In order for them to be able to make responsible life decisions, it was essential that they had critical thinking skills. I used every opportunity that I could to instill this. As soon as they were able to make decisions, I would allow them to pick their own clothes. I would teach them directions and ask them to show me how to get home from a subway map. I grew up in Houston, but we were living in Brooklyn, NY at the time. I also taught them how to play chess. This taught them how to make strategic decisions in life. I definitely see the benefit of these skills in their adult life. Their life decisions are well thought out before implementing.

It was important for me to instill a disciplined work ethic in them. I never “gave” them anything extra. I convinced them that they had to earn what they wanted by doing extra chores or by creating hobbies that provided a source of income. My youngest started making “spinners” in elementary school and was selling them for a quarter. He’d save up his money to buy candy or toys because that’s what he wanted. To see the pride in his eyes when he earned his money and bought his favorite trinkets was an indication to me that the lesson was learned. I would repeat to them “The world doesn’t owe you anything” like it was told to me. So, I’ve never expected anyone to come to my “rescue.” Everything I have ever had, I worked hard for and I wanted them to have the same attitude in life.

It was also important for me to teach them how to properly love and respect women. First, by not letting them witness anyone disrespecting their own mother and by literally giving them advice about how to approach and interact with females. I’ll never forget when my youngest wanted to ask a girl in his class to the school’s Valentine’s Day dance. I took him to the store and bought him some candy and a small teddy bear. When he went to school the next day and followed my instructions, he literally ran back home excited and told me she said, “yes.” The excitement in his eyes were as priceless as they are today when I see him in love with his wife. The happiness in her eyes shows me that he learned how to love a woman well.

Having chores around the house was a double lesson. This instilled a solid work ethic and sense of community because we all had to maintain the space that we equally shared. This also taught them how to maintain their own living quarters as adults. My oldest son was shocked when he went to college and some of his fellow classmates didn’t know how to properly do their laundry. So, the years of separating clothes and knowing the correct temperature to wash them was an appreciated skill when his mother was no longer around.

If I could do it all over again, I would have given more hugs and kisses. We would have had more conversations about their emotions and what they were going through. I couldn’t give them something that I didn’t have. My family wasn’t really big on hugs either. It was only after going to therapy myself that I understood the importance of mental and emotional health in maintaining a happy adulthood. Hopefully, I can instill this in my grandchildren when they arrive one day.

Loving my crown and glory: Finding beauty in my own ‘nappiness’