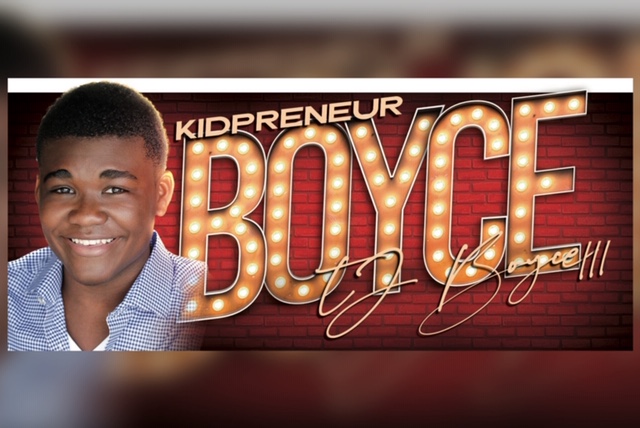 14-year-old comedian, kidpreneur: “You are not going to outwork me!”

HOUSTON – Funny, talented, real, raw and humble are words many use to describe someone who’s “lived more than a few years,” but speaking to 14-year-old TJ Boyce III, you realize some wise folks have been grooming this young man, and more importantly, he’s been listening.

The multi-talented actor, comedian and current entrepreneur spoke about his upbringing, his influences today and his plans for the future.

From a very young age, Thomas James Boyce III, also known as TJ, could always make people laugh with his big personality and charm. He first appeared in local theatre at the age of 8 where he took to acting and entertaining naturally. He had discovered his passion, and soon after, officially hit the spotlight auditioning and appearing in TV shows and commercials in Los Angeles.

But there were some things he learned along the way, primarily, learning to embrace who he was and acknowledging certain differences.

The Houston native went to Cypress Christian private school for nine years and was, for most of the time, either the only black student in the entire school or in his grade. That experience, he explains, heightened his awareness on multicultural issues.

“I understood both my perspective and the white community’s perspective on social and political issues. I felt alone as a race. It was a struggle,” TJ said. “One of the hardest times was when Donald Trump was elected president because some people felt like I represented the Democratic party, being black. I experienced some bullying. It was a culture shock.”

A pleasant reverse was when TJ had the opportunity to attend public school. He was enrolled at the High School for Performing and Visual Arts (HSPVA) for only a short while before he went off to be a part of the new Wayne Brady Show.

He channeled his experiences from school into material for standup comedy.

“In those two months that I spent at public school, I learned a lot about myself and diversity, I didn’t know what it was like to have black classmates and a black teacher,” TJ said. “As a comedian, it has given me great content to talk about in an interesting perspective. I have learned about myself and who I was, and what it meant to be black.”

This is a challenge that TJ feels he’s been training for all his life. He got his fearlessness from his parents.

“My mother and father taught me bravery and to speak my truth,” he said.

TJ grew up in a two-parent household and a family of performers. They all motivate each other.

His little sister, London, is also in the entertainment business and has recently landed a lead on “Antebellum.” His older sister is an opera singer and his father is an R&B singer.

When it comes to his mother, TJ definitively says, “my mom is the boss.”

TJ’s parents taught the children to become entrepreneurs, allowing them to launch their own business — Boyce Kids Cream Machine – an ice cream truck.

“We go old school with it. We’ve got the Bomb Pops, we’ve got everything. We are real over here!” TJ said. “What people don’t know, the ice cream truck is hard work and it’s hot in there! Kids don’t play outside anymore, so we now have to go downtown, to festivals, events, market on social media etc.”

And what has the rising mogul learned?

TJ said, “I love comedy and I love music. Jay Z and Dave Chappelle are #1 right now. They are at the place where I want to be. I take Dave Chappelle’s confidence and I take Jay Z’s work ethic and I try to combine them to make my best self.”

Advice for his peers?

“Be true to yourself and don’t let your age determine your dreams,” TJ said. “Really listen to your parents. They think they know everything but guess what — they really know a lot!”

Also, if possible, find a career mentor who is going to take the time to pour into you.

“My mentor John D’Aquino told me ‘you may me smarter than me, cooler than me, dance better than me, but if you outwork me, then that’s on me!’” TJ said. “And at 14 years old, I don’t care who you are, you are not going to outwork me!”