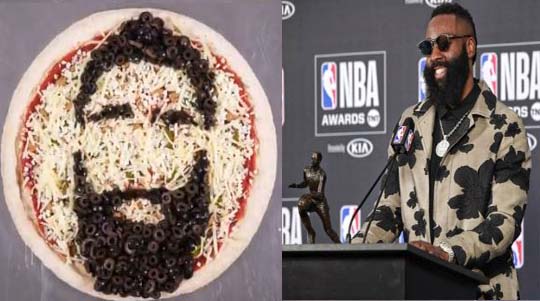 HOUSTON – During Monday night’s NBA Awards on TNT, Houston Rockets guard James Harden was named NBA Most Valuable Player for the 2017-18 season.  He is the third player in franchise history to receive the award, joining Moses Malone (1978-79 and 1981-82) and Hakeem Olajuwon (1993-94).

The MVP award was selected by a global panel of sportswriters and broadcasters.  Harden finished second in voting for the award in both 2014-15 and 2016-17.  He is also the only player to be a unanimous All-NBA First Team selection in each of the past two seasons.

The Rockets won a franchise-best 65 games in 2017-18, with Harden leading the league in scoring (30.3 ppg) while ranking third in assists (8.8 apg).  He became the fourth player to have averaged at least 30.0 points on a team that won 65-plus games, joining Kareem Abdul-Jabbar, Stephen Curry, and Michael Jordan (twice).  Harden is the only one of those players to have averaged at least 30.0 ppg and 7.0 apg.

Harden joined Michael Jordan (1988-89) as the only players to have averaged at least 30.0 points, 8.0 assists, 5.0 rebounds, and 1.70 steals in a single season since steals became an official statistic in 1973-74.  Harden has averaged at least 29.0 points and 7.0 assists in each of the past three seasons, joining Oscar Robertson (7 times) as the only players to have done so more than twice.

Since joining the Rockets in 2012-13, Harden has the highest combined total of points, rebounds, and assists of any player in the league.  He also ranks third in 3-pointers made and fourth in steals over that span.

Papa John’s Houston is celebrating their partner, James Harden winning the 63rd MVP Award so all day on Tuesday, June 26th when you order from papajohns.com you will get 50% off your online pizza order with PROMO CODE: HARDEN.  In addition, Papa John’s Houston is offering Harden-inspired ‘MVPizzas’ to lucky Houston-area customers.

The special ‘MVPizza’ will be free to the first 63 carry-out customer orders (one per customer), exclusively at the Papa John’s Houston restaurant location at 8588 Westheimer Road, starting at 10am on Tuesday, June 26, 2018.

“On behalf of all Papa John’s Houston stores, I’d like to congratulate our partner James Harden on his prolific season and well-deserved MVP trophy,” said Keith Sullins, Houston Papa John’s franchisee. “We’re excited to celebrate this 63rd MVP award with 63 ‘MVPizzas’ for local pizza lovers, and delicious discounts for Houston fans today only.”

Each extra large “MVPizza” is topped with ingredients that pay homage to Harden’s one-of-a-kind game: