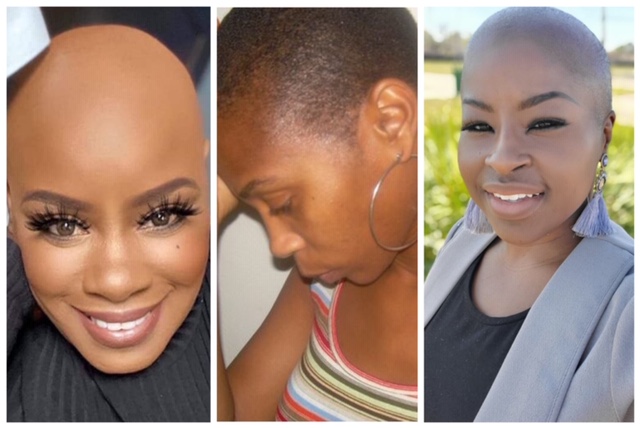 Live your best life — you are free to be yourself! Three beautiful, black women shared their stories of why they decided to join the growing movement of African American women proudly showing off their bald heads – and loving every minute of it! Story originally published on African-American News&Issues.

HOUSTON – “I am not my hair!” is the bold statement Jo H. Golden said, and she’s proving it. The gifted photographer turned the lens on herself, as she publicly chronicles one of the toughest fights of her life: battling Stage 3 breast cancer.

Golden spoke to us candidly while at the hospital undergoing chemotherapy, stopping from time to time to speak to assisting health care providers, as we candidly spoke about her diagnosis and her bravery in sharing it with others.

In addition to noting her strength while speaking of the effects of chemotherapy and her optimism of normalizing her life this summer when her treatments are scheduled to end, we were blown away by the raving beauty who’s decided to proudly share on social media images of her bald head, which illuminates her glimmering eyes and dazzling smile.

First Golden spoke about the devastation after discovering what was, at first, thought to be a cyst in her breasts, was actually a tumor.

“It was affecting my whole body, my breasts were hurting so bad, under my arm and on my nipple. It was sunken in, introverted,” she explained.

Golden went on to talk about chemo, radiation, upcoming reconstructive surgery, continuing to work throughout this ordeal and the joy to come when she rings the “cancer free” bell of completion. That part of her story mirrors millions of others battling the disease, but what makes her a standout from some is the new club of warriors she’s joined – the growing number of Black women who are removing the stigma and shame associated with hair loss and are yelling: “See Me, Accept Me and Love Me,” as they obviously love themselves. It’s a FREEDOM not truly experienced by many.

“My hair does not define my beauty. I used to think that it did, but it doesn’t,” Golden said. “My doctor said, ‘you are not your titties’ (chuckle) and he told me that I was beautiful. And me not having hair allowed other people to see my natural beauty from inside and out. I didn’t need eyebrows, my eyelashes are gone and at first, I felt less attractive. I did a video showing me without any of that and everybody kept saying how pretty I was, and it made me feel really good because I was feeling down on myself.”

Golden says no matter what you are going through, God is a comfort in your time of need.

“Have Faith in God. If you don’t have Faith in yourself then let God be the Faith for you,” she said.

To help with mounting medical expenses, the entrepreneur is offering services though her company, J. Golden Photography. In exchange for $100 donations, Golden will provide two retouched headshots. Donations can be made via CashApp, Zelle and PayPal. Visit www.jgoldenphotography for more information.

Kim Roxie, owner of LAMIK Beauty, has a different reason for shaving her head. The young Houston pioneer, known for her chocolate skin and slanted eyes, decided to free herself and sport a bold, new look. While not many knew why she decided to shave her head, many just applauded after seeing the beautiful photos she recently revealed on social media. Roxie said she did it to remove the shame of hair loss issues she began experiencing in her 20s.

“It was me accepting my own beauty. I had to ask myself, ‘Do I want to keep going through this and do I want to keep wrestling with these hats (wigs)?’ And so, I just said, ‘it is what it is, I’m just going to shave my head,’” Roxie said.

“It’s almost like you are always walking boldly even when you are not even feeling that way. People are always attracted to talk to you. What I am hearing is that it is a form of empowerment,” Roxie said. “I didn’t do it to try to free everybody, I was just trying to free my own self, but because of sharing my story, others don’t have to suffer in silence alone anymore.”

It felt good to let go.

“It was suffering when I was trying to cover it up. Actually, I am good. And even if I was to wear a wig right now, because of my mindset and where I am, I still would not be suffering. I am just making a choice to put it on, it’s just a hairstyle and I’m doing me. Now that I’ve come out about it, it’s no big deal. I’m just doing what I want to do. “It’s like ‘Girl bye!’”

And just like that, she’s moving on BEAUTIFULLY with her life, and encouraging others along the way.

RELATED ARTICLE: Loving my crown and glory: Finding beauty in my own ‘nappiness’

And then there’s Ms. Ikeoma Divine, a Southern Rootworker whose spiritual journey led to her

release the chains and walk in the purpose a ‘Higher Power’ laid before her.

“My earliest memories of being “trained” to look “civilized” was sitting in my aunt’s kitchen (who was a hairdresser) waiting to get my hair straightened with the infamous hot comb. The smell of burnt hair and the sound of the grease melting to my scalp as heat was applied is still engraved in my memory,” The Third Eye Lounge owner described. “Even as a child I would rebel against such mental conditioning by taking the bows out of my hair in church and running outside to sweat as my hair “turned back” into its natural state. Eventually, I conformed to this weekly process but there was always a deep-seeded regret of not being able to just ‘be me.’”

It was after visiting Africa for the first time, that she decided to let go of the European standard of beauty that had been forced upon her.

“I arrived there to see some women with very short haircuts who were absolutely beautiful. A week before I left Ghana, I dreamed that I cut all my hair off. Two weeks later, back in the US, I did it. IT WAS SOOOOO LIBERATING,” Divine said. “Although it was done at a time when most women wouldn’t dare do so, I was utterly surprised by the response from men. I noticed that not only would men go out of their way to compliment me on my short cut, but that I started attracting “different” kind of men. These men really thought I was beautiful in my natural state and were not really concerned with an “image” of me or what I was supposed to represent. It also forced me not to hide behind my hair and to tap into my most powerful attribute… my femininity. It’s an attribute imitated by many, but the power comes from one’s authenticity.”

We applaud our three she-ros for embracing their true selves and having such an open and honest dialogue with us. We wish each of them continued health and happiness.