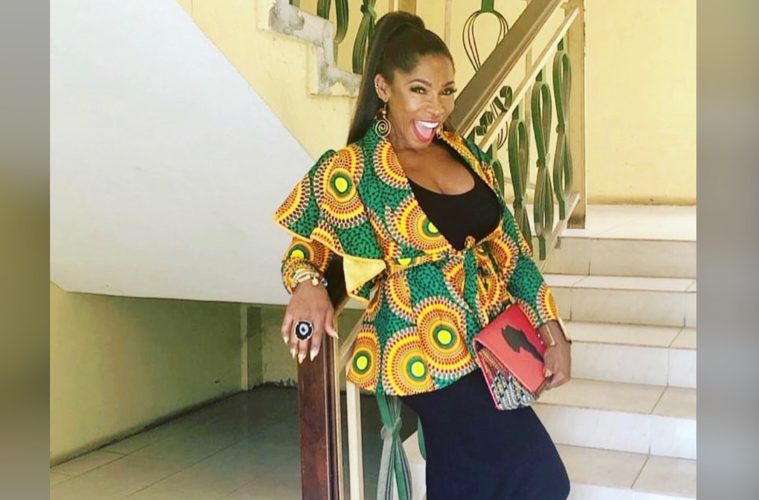 HOUSTON – There isn’t a teen from this generation or from three decades ago who does not know the choreographed dance moves set to Full Force’s “Ain’t My Type of Hype” in the iconic movie, “House Party,” where Tisha Campbell and Adrienne-Joi “AJ” Johnson battled it out with the original high top fade wearing rappers, Kid ‘N Play. The movie is celebrating its 30-year anniversary.

And there isn’t a single-mother to a son around who can’t relate to Johnson’s character in “Baby Boy,” also starring Ving Rhames and Tyrese Gibson, which is now at its 20-year anniversary.

We chatted with the Hollywood actress as she visited Houston promoting her new series, getting a much-needed dose of spirituality and a reminder about embracing our ancestry.

First Johnson allowed us to take her down memory lane, telling us how it felt to be a part of Black movie history.

“I look at it as I was privileged and blessed to be a part of Baby Boy and House Party, and what I think has made them iconic projects is that they were shot from a collaborative spirit; the producers, the directors, the studios, the actors,” she said.

This year, she’s excited about her latest acting project, playing a publicist in a new romantic dramedy, “Stuck with You.”

“It is an amazing story that covers a celebrity couple who are #RelationshipGoals in front of the door, but behind the door, they have the most troubled, dysfunctional, tumultuous relationship ever so we watch them navigate what’s real, what’s life and love,” Johnson said. “Are they chasing the money and celebrity, or are they chasing their peace and true love?”

And about peace and love, Johnson enlightened us about another project near and dear to her heart: Ghana, a place she feels we all need to visit.

“Oh, my goodness. My visit to Ghana over the last year changed my life. My passion for learning my true history, and understanding my purpose calling of bridging African Americans and Africa helped me create an organization From Bridge to Better,” she said. “I don’t believe that we were supposed to be separated over 400 years ago through the Transatlantic Slave Trade anyway, but now that we are separated, we must bridge the gap. Bridging food, language, fashion, music and entertainment. The truth is, is you are of African descent, we may be related. We are brothers and sisters, so instead of promoting the separateness, why not promote the connection?”

Johnson has partnered with the US Embassy in Ghana to help promote the mission.

“One of the things that fascinates me is just as we have a story as African Americans who came over from Africa in the slave trade, they also have a story of the Africans who were left behind. We have to learn our history and start talking about what they feel and what we feel. That’s been part of the divide, if more of us get a chance to go over there, there’s no way we can come back to America unchanged.”

Speaking of change, Johnson is also a life coach, helping others improve their lives, through spirituality and positivity.

Gabrielle Union shared that Johnson helped change the way she communicated with other women, helping her to remove the negativity she was carrying.

Johnson’s advice to others? “We need to stop operating from the standpoint of ‘What about me?’ Be the blessing that you want to receive and watch what happens.”

She went on to add, “I want everyone in this month and this year to remove the limits, because the limits are not defined. Limits are something we give ourselves. We limit ourselves with age, employment, parenthood and none of that stuff has rules we have to live by. I am living a limitless existence. The life you want to live can be yours.”

Johnson is also a fitness guru. You can learn more about THE AJ ZONE, Inc. at www.theajzone.com.