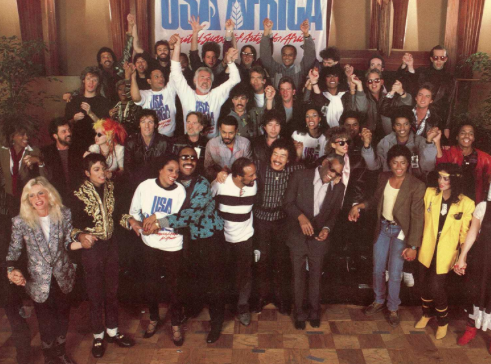 We Are the World: Happy Anniversary to this wonderful record!

Thanks to writers Michael Jackson and Lionel Richie, and producer Quincy Jones, We Are the World was released for the entire nation to hear on March 7, 1985. Known as the “fastest-selling American pop single in history,” We Are the World is a charitable song that supported and helped families suffering in Africa. Honored for many prominent awards such as three Grammy Awards, one American Music Award, and one People’s Choice Award, We Are the World received a Quadruple Platinum Certification by the Recording Industry Association of America. That’s 4 times Platinum! What a record!

Celebrity collaborations included Michael Jackson, Lionel Richie, Stevie Wonder, Tina Turner, The Jacksons, Diana Ross, Al Jarreau, Ray Charles, and many more! Because of their collaboration, We Are the World raised over $63 million for humanitarian aid in Africa! Ninety percent of the raised funds were sent to families in Africa!

“Let’s realize that a change can only come, when we stand together as one!”

Thank you Michael Jackson, Lionel Richie, Quincy Jones, and other featured artists for allowing the entire nation to realize what a big change could actually happen in this world. Thank you all for setting an example and showing us that “we are the ones who make a brighter day” for people who are in need, because We Are the World!