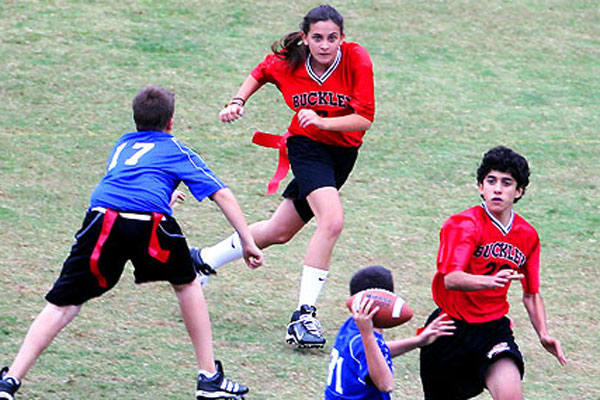 It seems Michael Jackson’s kids are living like normal children, something their father never had the chance to do.  Paris, Prince Michael and Blanket are no longer the children under the veils, and are out and about, enjoying everyday activities with other children their age since their pop-icon dad passed away in June 2009.

According to People.com, 13-year-old Paris Jackson has become the first female ever to join her Los Angeles private school’s flag football team.  And just like her dad, baby girl’s got great leg work!

“Her grandfather said she is playing and the family is happy for her because she is doing what she likes,” a Jackson family source told People.com. “She is a strong girl.”

Paris has been a pillar of strength since her father’s passing and continues to impress the world with her resilience.  Her brothers also seem to be thriving during these tough times while the world remains captivated by the ongoing trial of Dr. Conrad Murray, the physician charged with involuntary manslaughter in Jackson’s death.

Prince and Blanket stood on the sidelines to watch their sister in action.  Their support must have helped.  Paris and the team were victorious, and in normal behavior, she proudly Tweeted about her win to her followers, “We Won 32-6!!!!!!!! Yeahhh Boiiiiii!!!””

We continue to wish the children the best and our prayers go out to the entire Jackson family.