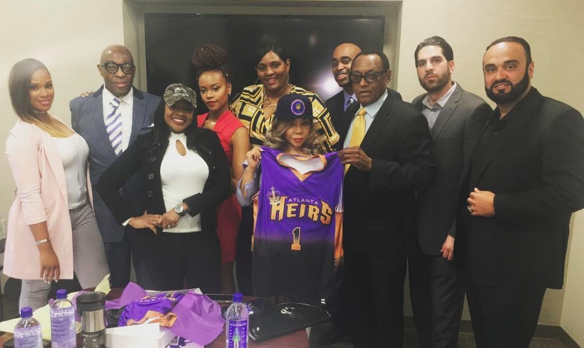 Tameka “Tiny” Harris has made another boss move as she is now the owner of the Atlanta Heirs! She announced her new ventures via Instagram last Thursday as she captioned a photo with this: “Proud to be the first female owner of a co-ed professional basketball league… Thx to everyone in this picture for helping me make this monumental boss move!! I’m excited to share this with the world and more so with my city #atlanta. I’m officially the owner of, ‘The Atlanta Heirs’!!”

The new team has been formed under the Global Mixed Gender Basketball League (GMGB).

According to the GMGB website, the league “features both men and women, playing on the same team, with male and female coaches, managers and staff. The team is paid on equal levels; no more will a woman make less than a man for performing the same job. Opportunities are given to local college age players; experience is something learned, not given. Scholarships are invested into communities, because college has never been so far out of reach for so many students. Camaraderie is found again through sport. Communities will come together to see an event; to connect with each other, to put down the phone and have real conversations and to value good family fun.”

We all know that Tiny is no stranger to the management business as she has managed several girl groups along with her daughter’s solo singing career, so managing a basketball team should be a breeze for a big boss like Tiny! And with her reuniting with girl group Xscape, this is looking like a big year for her!!! Congrats, queen!