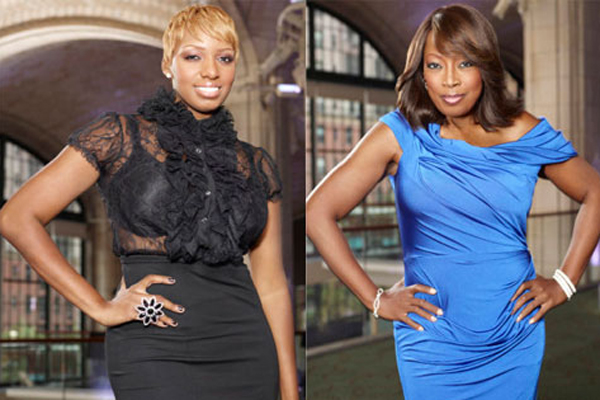 Catfights on reality TV: Not black, not white — just wrong!

It is safe to assume that the image of Clair Huxtable has officially been retired.  While she blew a breath of fresh air into the ideological image of the working, black mother, her image has been laid to rest along with what many say is the family-oriented television programs.

Now Clair has been transformed into what they call a “real housewife,” she is sassy, abrasive, catty, overindulges on opulence and will rip a “friend” to shreds while the cameras are rolling.

But who is this new housewife?  Just take your pick!  She is everything from the sistah from the Atlanta suburbs, to the spic, hot-headed Italian from New York or New Jersey, to the botoxed babes from Orange County or Beverly Hills.

I ran across this wonderful Newsweek article that took issue with the negative stereotypes of black women on reality TV, and while I totally agree, I must expand and say women of all colors, races and nationalities are doing away with sisterhood and taking the catfight to a whole new level!

The catfight used to be “taboo” on TV and the aired episodes would get major TV ratings.  Remember the wonderful catfights and slap-matches Joan Collins (Alexis Carrington Colby) would have with Diahann Carroll (Dominique Deveraux) or Linda Evans (Krystle Carrington) on Dynasty?

Check out an old “Dynasty” catfight between Dominique and Alexis, courtesy of Youtube!

Well, those choreographed boxing bouts have nothing on what we see today.

Enter NeNe Leakes – While we all love her strength and sass, the drama she manages to keep up on almost every episode of every season can become a bit draining.

To keep a counter of the NeNe brawls, she went “all in” on Sheree Whitfield on season one and former “bestie” KimZolciak  multiple times throughout multiple seasons of Real Housewives of Atlanta.  She spoke unfavorably of two “self-made” women; Kandi Buruss when she first joined the cast and Phaedra Parks on this season.

And don’t think she limits her attacks to just women.

She  spit major fire at her husband Greg—but he may have deserved a bit of that — had a bit of the buddy snag with Cynthia Bailey’s then fiancée’ (now husband)Peter Thomas and now seem to have an irreparable friendship with Dwight Eubanks.

Now on this season’s Celebrity Apprentice she has had a “falling out” with Dionne Warwick, said some really hurtful things to LaToya Jackson (who we really have a newfound respect for) and is embroiled in the mother of all catfights with Star Jones.

And what’s more is that NeNe lets her feuds carry over – and escalate – onto the reunion shows and any talk show appearances she makes.

“I really don’t make a point of spending a lot of time with strippers,” Jones remarked about Leakes during a NEWSWEEK interview.

Is this how we act? It would seem so.

But is Leakes as evil as she lets on or is this all a brilliant marketing technique of capitalizing off her brand?

Anna Nicole Smith was not as dumb as she let on in the media, while the fallen star definitely had her problems, her antics (sometimes calculated) was all a way to capitalize off her branded “crazy.”

So with this in mind, is Leakes just capitalizing off her branded “catty?”

Jones also revealed she had a plan.

“Pitting us against each other is good ratings. So we’re the ones who had to be smart enough to know how to handle it,” Jones says. “From the moment I was cast in Celebrity Apprentice I knew exactly what I was there for. I was there to raise money for heart disease and to publicize my book. Look at every clip of me and you see my book or the symbol I wear for heart disease. Honey, I had a plan.”

See the pattern here?  People love the scandal and love to scandalize.  Maybe these women are securing their cash flow by giving audiences what they want.

Let’s be frank, contracts are not renewed for the boring.  One of the original Atlanta housewives DeShawn Snow was a bit if a snoozer, so off she went. And while we were somewhat interested in the financial woes and NFL contract problems of Lisa Wu Hartwell’s hubby, we lost interest in the exotically beautiful, always perky – but unwilling to dabble in any pettiness — housewife.  She was a righteous go-getter and I am to ashamed to write, but the steam of her television appeal was beginning to run out with viewers, so Bravo said “Bye-bye.”

New Jersey had their Danielle Staub, Teresa and the Manzo sisters; New York had their Bethenny and Jill; and Paris Hilton’s aunts Kim and Kyle keep up the drama on Beverly Hills –not to steal any shine away from Camille Grammer!

Catfights can also be seen between Shaunie O’Neal and the girls on Basketball Wives.  While Evelyn Lozada still holds the Queen Bee crown of smack talking, Tami Roman and Gloria Govan kept the fireworks popping.  But even lil’ ole Royce tried to get her “snappy on” so she could secure her almost lost spot.

And who can forget when Tamra of Real Housewives of Orange County yelled, “Hold on to your daddies, girls, here comes Gretchen!”  Ouch!  Taking shots at the young hottie for being engaged to a much older man (who has since past away).

These women cannot seem to have a peaceful dinner or outing without a little hair pulling, finger pointing, shouting or table tossing.  They clearly show cattiness has no color.

The Newsweek article said reality TV is an equal-opportunity offender when it comes to stereotyping.

According to the article, Holly Robinson Peete who is a well-respected, veteran black actress and philanthropist complained black women were not shown in enough positive light.

“Listen, there are plenty of white women acting a fool on television every night,” Peete, current co-host of CBS’s “The Talk” said. “But there’s a balance for them. They have shows on the major networks—not just cable and not just reality shows—about them running companies, being great mothers and having loving relationships. We don’t have enough of that.”

So what do the icons have to say?  The timelessly beautiful “Claudine” “Dominique Deveraux of Dynasty” and “Whitley’s mom of a Different World” is not pleased.

“What I see now on television for the most part is a disgrace, as far as how we’re depicted,” said Carroll.

And how about the most famous black mom in history?

I guess we can just end it all with Esther Rolle’s famous “Good Times” quote, “Damn! Damn! Damn!”