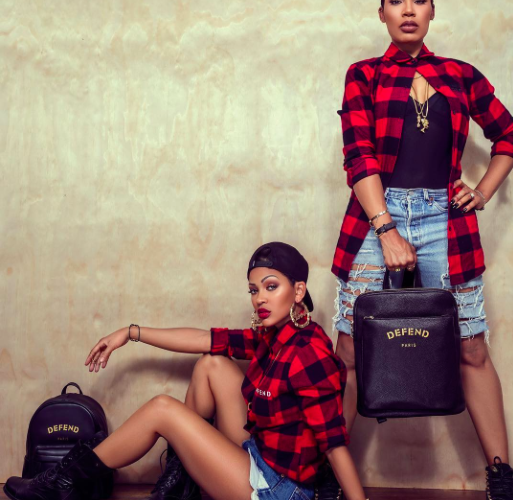 Beautiful siblings Meagan and La’Myia Good are doing much more than fulfilling their family duties and transforming the entertainment industry— the sisters are also helping to transform the lives of young women through The Greater Good Foundation. And they’ve decided to take it up a notch by collaborating with high-end brand Defend Paris.

The sisters have collaborated with fashion designer Jeremy Douay and artist Brahim Zaibit in order to reveal the power of what it means to #DefendGoodGirl through fashion statements. Meagan and La’Myia have successfully combined their mission to empower young girls and to slay all at the same time.

While chatting it up with N.W.A., Meagan revealed some details about the organization she’s started with La’Myia and why they chose to collaborate with the Defend Paris brand. Good said they chose fashion as an avenue to give back, because the concept is “two-fold.” She stated that “We’re really hands-on and we go to different schools, we travel around the world, and we really mentor kids one-on-one, but also with fashion, it’s something that really affects people… young people love fashion, and I think when you’re able to wear something that represents what you stand for, it’s fly. It’s something that they can relate to and they’re into… You can express yourself without saying anything.”

The Defend Paris clothing line has been sending out powerful, meaningful messages through their clothing all over the world. They have even graced Fox’s hit show Empire with their impressive and bold fashions. When discussing the brand, Meagan expressed that “The Defend Paris line is already the type of line that stands for something, and is willing to defend whatever that cause may be. They have Defend Human Rights with Madonna. They have Defend Africa with Akon.” Meagan and La’Myia felt that it was only right to Defend the Good Girl! She passionately stated that “instead of being a bad B-I-T-C-H, why don’t we bring back the return of the good girl?” According to Good, the Good Girl is defined as the girl who respects herself, the girl who loves herself, and the girl who won’t fall for anything. We absolutely agree!

Aside from fashion, The Greater Good Foundation has already made a phenomenal impact on young women in the Los Angeles area. Good told us that the organization has a curriculum that they share with the Compton Unified School District that they intend to expand. Typical subjects like Math, Science and History are taught via the arts. “La’Myia and I grew up very artistic, and that’s the way we express ourselves. That was how we got engaged and that was how we got excited. When a lot of these kids are learning in a regular school setting, sometimes they may feel like they’re not smart. They feel like they’re learning differently from some of these kids, so something may be wrong with them, but in all reality, they’re actually creative and need an environment where they can learn that way,” she expressed. The sisters also teach hands-on classes from time to time while mentoring the girls.

Although they’ve been through things that they don’t always share publicly, they are have successfully been able to connect with with these young girls in an effort to show them that they are not alone through love, support and resources. They hope to eventually start a charter school, and are currently working on having two big events a year so that young women from all over the world can receive a dose of inspiration with some testimonies and support from other women who look like them, or may have been in their shoes once. “Everything that they have experienced is what they get to give back,” she said.

While working closely with girls who have experienced rape, gang violence/affiliation, bullying, and drug addicted parents, Meagan and La’Myia have experienced their own blessings. Meagan revealed that “We’ve seen a little bit of everything, and that’s the best part is knowing that we look at someone and someone else might say ‘Oh, they’re too far gone’ or ‘It’s not realistic,’ but just talking to them, just making yourself available, just giving them somewhere to go, just pointing them in the right direction and staying on them can really make all the difference in someone’s life, literally.”

The Defend Good Girl limited edition flannel, which was released July 28, can be purchased at http://defend-paris.com. To keep up with these two sisters, follow them on IG and Twitter @MeaganGood and @LaMyiaGood. Defend Paris is also on Twitter @defendparis.