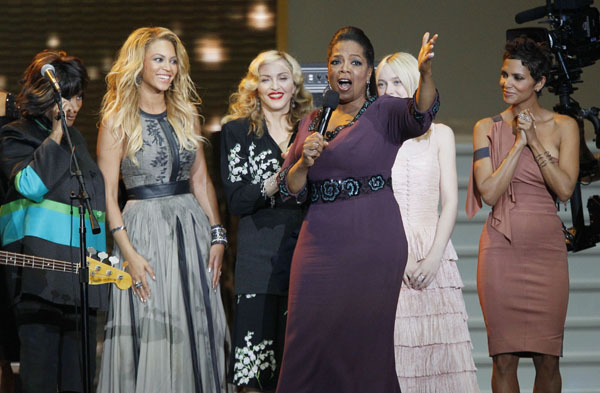 CHICAGO – So, who has the POWER to have an NBA playoff game moved for a talk show?  One word, one woman — OPRAH — and they did it gladly.  Ms. Winfrey went out in true style for the taping of one of her final shows Tuesday at Chicago’s United Center, according to CBS.

The CBS Early Show reported Oprah’s producers convinced the NBA to move a high-stakes playoff game to give more than 1,000 workers time to transform the United Center into a mega-talk show studio fit for a Queen – the Queen of daytime talk, that is.

Academy award winner Tom Hanks served as host for the evening, introducing the biggest-named celebrities who were all eager to honor the Queen of daytime television as she prepares to bid farewell to her legendary show.

Not only were celebrities in the house, but more than 20,000 fans packed the center and the streets to wish Oprah farewell.  The show used a lottery system to pick the lucky attendees after more than 154,000 requested the tickets.

Winfrey’s longtime partner, Stedman Graham, honored his woman by telling her how much he loved her and was proud of her.

“It really does amaze me that I get to be around a woman who changes people’s lives every day and who also takes her own lunch to work,” Graham told the crowd. “You know what really is amazing? You have done this, sweetheart, through all of the sacrifices you’ve made, humility you have and through God’s amazing grace.”

Aretha Franklin then serenaded Winfrey with a soulful version of “Amazing Grace.”  She later joined Usher for the show’s finale song, “Oh Happy Day,” as sparkly confetti filled the arena.

Not even a scandalous, embarrassing political love affair could keep celebrity well-wishers away.  Fellow former journalist and Kennedy Heiress Maria Shriver, who has always been considered one of Oprah’s true friends, honored the woman of the “final” hour the same day it was revealed her husband Arnold Schwarzenegger, fathered a child with a woman on his household staff more than a decade ago. Shriver did not mention her husband during the taping.

“You have given me love, support, wisdom and most of all the truth,” Shriver told Winfrey. “And I know I’m not alone in receiving those gifts from you.”

Six-time NBA Chicago Bulls champion Michael Jordan, couch-jumping heartthrob Tom Cruise and original material girl Madonna all showered Winfrey with kind words of how she impacted their lives. Jerry Seinfeld even put on the tux and tails to grace the audience with a comedy routine.

Even our Houston hometown girl, Beyonce (one of Oprah’s favorite performers), rocked the house.  She sang her newly released song “Run the World (Girls)” backed by dozens of dancers.

There was no shortage of praises in the room.

“She fights for things she believes in, even if it makes her unpopular,” Madonna said.

“You always had the power, and that is the message you brought into our lives,” Cruise told Winfrey.

“Oprah Winfrey, because of you women everywhere have graduated to a new level of understanding of who we are, of what we are and most of all who we can be,” Beyonce said.

“Thank you is not enough, but thank you,” Winfrey told the crowd as she wiped away her tears.”For your love and your support, thank you.”

Will Smith and Jada Pinkett Smith summed it up best when they told Winfrey she mothered millions and “that puts you in the status of a goddess.”

Winfrey announced in November 2009 that she would end her popular talk show after 25 years. Tuesday’s taping will air May 23 and 24, before Winfrey’s final show on May 25.