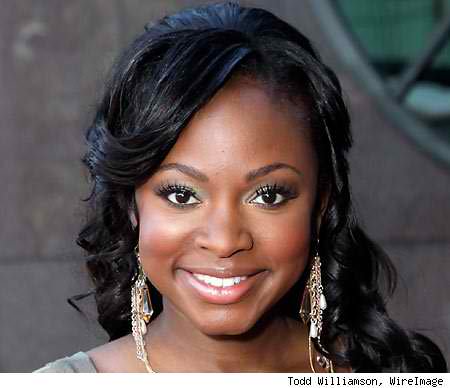 First she gave a gritty, raw portrayal of Lil’ Kim in “Notorious,” which chronicled the life of slain rapper Notorious B.I.G. aka Biggie Smalls, now she has another stirringly seductive (but made for TV-friendly) role as a Playboy bunny in a new NBC series.

Blackfilm.com gives us a little sneak peek of what excitement we can expect.

“The Playboy Club” is set in the early 1960s, and the Chicago boys club is the door to all “gentlemanly” fantasies.

“I’m going to be the first chocolate Centerfold.  I am, you can’t discriminate against these babies,” Brenda says as she taps her top half.

When innocent new Bunny Maureen – who wants to take the world by storm – accidentally kills one of the Windy City’s most powerful mafia bosses… and the only person capable of covering it up and protecting her is Nick Dalton (played by Cibrian), a man who once worked for the mob but is about to run for district attorney.

The Playboy Club, which will air Mondays at 10 ET/PT, takes you inside the seductive world of the Bunny, the epitome of beauty and service, where one can rub shoulders with the decade’s biggest mobsters, politicos and entertainers (like Tina Turner and Sammy Davis, Jr.)

For more on the series, visit blackfilm.com.