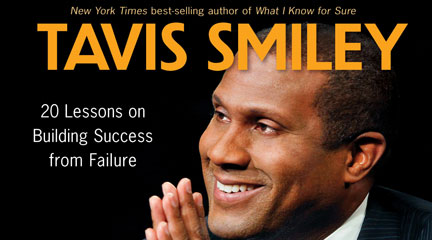 HOUSTON—As part of his 10-city national book tour, Tavis Smiley made a stop in Houston to meet, greet and inspire fans at a reading and book-signing on May 13.

The best-selling author and award-winning broadcaster promoted his new book, FAIL UP: 20 Lessons on Building Success from Failure, at Barnes and Nobles in the 7600 block of Westheimer.

Smiley told fans “failure” is something we hear a lot about these days. From governments to Wall Street, from television stars to job reports, the possibility and consequences of failure appear to be all around us, becoming part of our everyday lives.

His new book aims to remind readers that failure is often the first step in a truly great success story. Reflecting on his 20-year anniversary in broadcasting, Smiley, through stories and reflections on his own life, showed how opportunity is often hiding just beneath the surface of disappointment, despair or disgrace.

Revisiting the intimate tone of his New York Times best-selling memoir What I Know for Sure: My Story of Growing Up in America, Smiley recounts 20 instances of perceived failures that were, in fact, unforgettable lessons. He teaches through powerful, personal and — at times—painful examples pulled from his and other famous fail-uppers’ own stories. Using today’s headlines and the profound truths he’s gained through the years, Smiley illuminates how the inevitable setbacks in both our private and professional lives can become possibilities for growth.

“Very few achievers want to show off their warts by acknowledging the mistakes they’ve made along the way; much less put them in a book,” Smiley said. “I think that’s unfortunate. Millions of people struggle with what it means to be successful, and the lesson they take away from successful folk who hide or deny their failures leads to an artificial construct of success.”

Smiley says at a time when much of the conversation is focused on what’s wrong, FAIL UP helps us remember what’s right. As human beings, we cannot help but fail; it is how we choose to respond to failure that determines what sort of people we will become.

Smiley wants to inspire audiences to push the reset button in their lives and remember “Every day that you wake up, you get another chance to get it right, to bounce back from failures big and small—to fail up.”

Smiley’s next stop is Chicago on May 19.