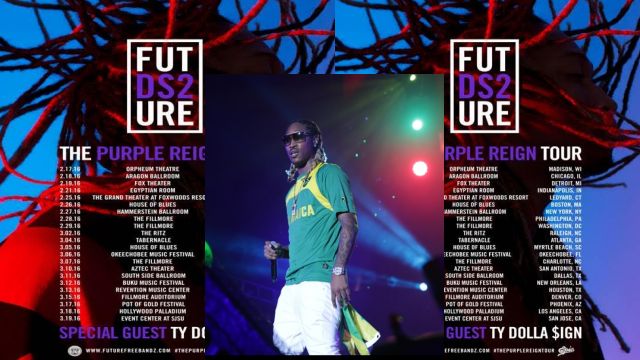 Kicking off 2016 in style, FUTURE unveils dates for his highly-anticipated, “PURPLE REIGN” tour.

The multiplatinum Atlanta hip-hop game-changer personally announced the North American tour via his social media, revealing an engaging and entrancing video trailer. The tour will kick off Feb. 17 in Madison, WI at Orpheum Theatre, and end up on March 19 in San Jose, CA. FUTURE WILL PERFORM IN HOUSTON ON MARCH 13.

Everything will turn PURPLE in 2016…

FUTURE just closed out an historic 2015, releasing not one but two #1 Billboard Top 200 albums, namely DS2 [Epic Records/A1/Freebandz] and his collaboration with Drake, What A Time To Be Alive [Epic Records/A1/Freebandz & Young Money Entertainment/OVO/Cash Money Records/Republic Records]. In addition to an online campaign, Spotify features Future in two hand-painted Brooklyn billboards to commemorate the “Year In Music,” announcing that “Bushwick spent 2,857,933 minutes with Future this year. Now, that’s a lot of f*king commas.”

He recently covered both XXL and Mass Appeal Magazine and delivered a downright explosive performance on the Outdoor Stage of ABC’s Jimmy Kimmel LIVE! In case you missed it, watch him tear up “Blow A Bag” and “Where Ya At.”

Future’s reign continues in 2016 bigger, bolder, and better than ever.

Changing pop culture, the zeitgeist, and the game all at once, Future clawed his way to the top of hip-hop in 2015. He unleashed two unanimously acclaimed mixtapes, Beast Mode and 56 Nights, and seized #1 on the Billboard Top 200 with both DS2 and his RIAA gold-certified collaboration with Drake—What A Time To Be Alive. He conquered year-end lists from Rolling Stone, Complex, Spin, Noisey, NPR, and many more, living up to his nickname “Future Hendrix” by blasting rap quite literally to outer space. His smash single “F*ck Up Some Commas” went gold, and he performed show-stopping sets everywhere from ACL and HARD Festival to Jimmy Kimmel LIVE! As he readies more music, Future will ignite audiences everywhere on 2016’s “PURPLE REIGN TOUR.” Beware. Future is here.