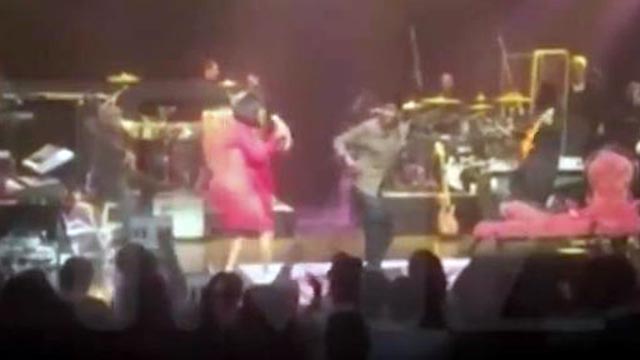 Get yo’ a$$ off the stage! Patti LaBelle goes off when man strips during concert

UMMM, don’t try those shenanigans during the queen’s show! Patti LaBelle invited excited fans to join her on stage during a concert, but one “fool” decided that he was going to go above and beyond and strip during her show.  Well, just one problem, it got him tossed off the stage and out of the venue!  Ms. LaBelle was not having it!

At first she tried to be nice and told her rushing security to stand down, saying “I got this,” but the man on stage just did not get the point.

“Don’t you dare. Not on my stage.  I’m 71 years young. I’m not Nicki Minaj or that little Miley,” LaBelle said when she saw the guy getting ready to “take it off.”

But he did not heed her warnings, and kept right on.  DISRESPECTFUL!

“Get off of my God-derned stage, b*tch….and stay off!” LaBelle yelled, rushing him, as she called for her security.  “Put him out of the building. Put him out. How dare you?!”

I mean, REALLY!  The nerve of some people.  The original “Lady Marmalade” doesn’t want to see any of your business!