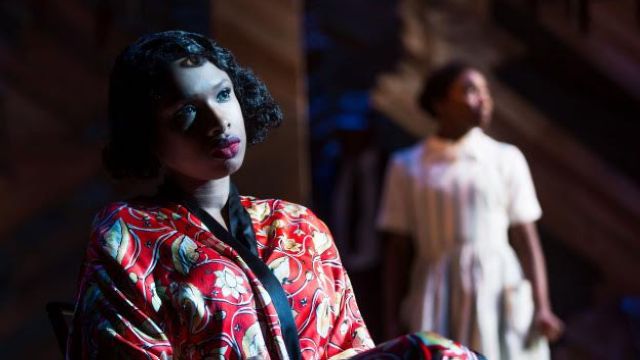 Jennifer Hudson sat down with W Magazine to talk about gun violence in America, “The Color Purple” and Spike Lee’s new polemical “Chi-Raq.”

From the Disney cruise, “Dreamgirls” and hit singles, Hudson is finally embarking on a new Broadway journey as the zealous Shug Avery from the Pulitzer Prize winning novel by Alice Walker’s “The Color Purple,” which opens Dec. 10 at the Bernard B. Jacobs Theatre in New York City.

Before casting, Hudson knew that she would play a strong dominant female character like Sophia, similar to her Effie White character in Dreamgirls.

“What I can say now looking back and thinking is that when you think of Color Purple, you know instantly with Sofia she has this big, robust personality. She’s a strong woman and she’s just, Bam! in your face. But Shug…she has an arc, so it’s hard to just channel in on Shug and get a grip on her. You have to think about it. But now that I’m playing Shug, in the show, she’s the light of the stage, she brings the color into the story. And that’s who I am in person as well. And she’s a singer. And it’s the first glamorous role I’ve ever gotten to play. Normally my roles are very heavy, emotional and things like that, but it’s really nice to play a lighter character, a more glamorous character, a more comedic character. That’s fun,” she said.

Hudson said that her process of becoming Shug Avery was out of her element, however after getting acquainted with the sassy songstress, she realized how much she had in common with the character.

“It’s always weird to me how when you portray a role, you find that character is a lot like yourself. Like Shug is a strong woman, she’s a positive woman, she’s a successful woman, she’s a beautiful woman, she’s a sexy woman… all of these things. And she’s a wise woman. One of my favorite lines is, “Why any woman give a s–t what people think is a mystery to me.” That’s my attitude. I don’t give a s–t what you think. You know what I mean? Why would we be worried about that? That’s one of those lines that makes me realize how Shug and I are alike,” she said.

The “Think Like A Man” star also shares her thoughts on race and diversity on Broadway, stating that the diversity has increased at a great amount. She shares that it’s not about color, but the craft that one must possess while telling a powerful story.

Hudson also addressed gun violence, which is an issue in the new film “Chi-Raq” based on Aristophanes’ Lysistrata. The topic hits close to home for the star, after the murder of her mother, brother and nephew in Chicago.

She is set to play a mother of a young girl killed by gunfire, assuming it was a difficult role to agree to since the death of her family members. However the star decided to take a stand against gun violence, so that others will never have tell the same tale.

“Yeah, of course. It’s like, you’re asking a lot. This is reality for me. This is my life. A part of my life. And I definitely had that moment of like, ‘Are you serious?’ But when I really thought about it, I understood why he came to me and I thought, ‘You know what? It’s worth me telling my story so that hopefully no one else has a story like this to tell,'” she said. “The film we’re doing is trying to save my city, as my mother said, take care of home. So for that reason I was like, ‘Okay, I get it, it’s worth doing.’ But I don’t think it’s anything I will ever, ever revisit again.”

The film sparks an interesting conversation about guns and the questionable ethics and morals of our nation.

“If we didn’t have these issues, I don’t think a movie like that would have needed to be made. That’s the point of making it, to make people pay attention and say, ‘Guys, we have to start somewhere.’ And it’s not just the city of Chicago. It’s everywhere. It’s a bad time right now, no matter where we look. Kids can’t go to school, people can’t go to church, you can’t go to the movies. It’s like, what are we doing to ourselves? What’s happening? We’re acting like animals,” she told the magazine.

Hudson continued, “It’s unfortunate that things are this way, but it’s not going to change unless we do something about it. Even in filming the movie, there were times where more and more incidents kept happening. And Spike kept writing it into the movie. Those who don’t get it, it’s like, how don’t you get it when this is what the issue is? And if you do have a problem with it, have a solution to come along with it. What plan do you have? How do you not try? And what are we supposed to do—just kill each other? It’s a scary time no matter who you are, where you go, what color you are, where you live, honey.”

The film also stars Lala Anthony, Angela Basset and Samuel L. Jackson. Focusing on the women in the community withholding sex from their gang-affiliated boyfriends to stop bloodshed. The film also sparked some feedback and criticism from fans regarding the stereotypical roles of African American women in films.  However, Spike Lee has never had an issue addressing the critics regarding the craft of his films.

Spike Lee joined Sway In The Morning to talk about the film.

“Here’s the thing, I’ve been doing this since 1986. My first film was She’s Gotta Have It. Some black women said she’s an empowered black woman, other black women said that it was the stereotype of the sexualized black woman. I feel the character is a very strong character and you see her growth. Let’s look at the women in the film. Teyonah Paris, Angela Basset and Jennifer Hudson. If you don’t think those great actresses portray strong black women in the film, I don’t know if you know what a strong black woman is.”

“If you have not seen the film and you felt that we were making fun of the murders on the streets of Chicago or that we were making light of it, let me ask everyone a question: Jennifer Hudson’s mother, brother and nephew was murdered in Chicago, why would Jennifer Hudson be in a film that ridiculed her murdered mother, brother and nephew? Why would she be a part of that?” he added.

Make sure to check out The Color Purple on Broadway, and Chi-Raq is in theaters now!