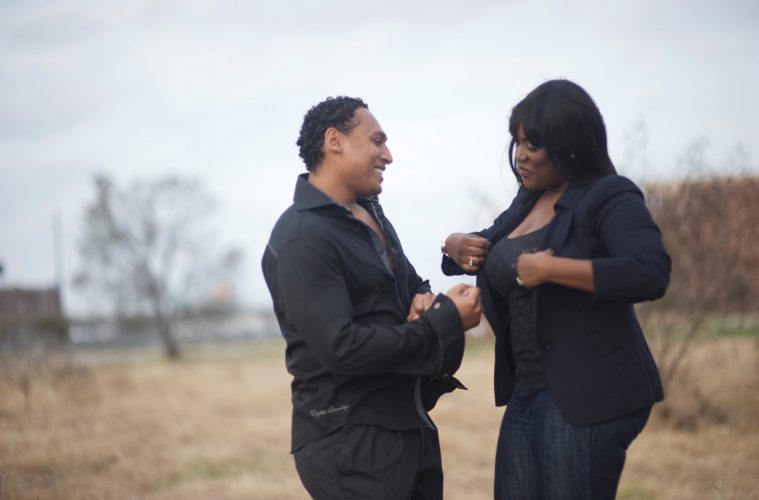 It’s OK to be single….when you’ve had enough of ‘dead end dating’ and fuckery as a whole

So, what is dead-end dating? It is exactly what it sounds like. It’s that brick wall you hit, it’s that end of the road. It’s that last call for alcohol on the Midnight Train to Fuckery. It’s that — let me walk away from this shit before I dig myself in deeper.  It’s what single men and women realize when they decide that enough is enough — and they may just have to do that “solo thang” for a while.

(You see the photo? Can you read it? That’s a man “shooting his shot” and a woman looking at him like “yeah, bro..I’ll wait on it.” It’s the sad, but true, tug-of-war we have when meeting and connecting with someone. The initial stages for some “first encounters” are often full of skepticism, you know.

And the way things have been turning out for most people these days, when the Match.com and the Black People Meet dating sites are not working out too well, people are deciding to walk away from it all…and guess what –it’s perfectly alright!

There is nothing wrong with being single! It’s not a badge of shame. It does not mean you’re not a good catch and it damn sure does not mean you are hitting that “old lady” or “old man” status that says you are no longer “sell-able” on the market. Believe-you-me (as the old folks say) there is someone for everyone out there to occupy your time for a spell, if you so choose. But nowadays (speaking only for myself and the dozen or so women who have inboxed me on the matter) some folks just ain’t worth your time!

Now — don’t get me wrong — just because I personally have decided to go the single route does not mean that I do NOT believe in LOVE.  I just don’t believe that I will find my Prince right now — and oh honey, have I kissed a lot of frogs on that quest to do so. Rrrrriiiibitttt.

I have decided that I am staying away from the murky waters of lost romance and am just focusing on self — and of course, my kids — but some of my friends think I am absolutely insane for thinking that way!

But I am in good company!

The beautiful, fashion-forward, gainfully employed, multi-talented, daughter of a living legend, Tracee Ellis Ross, recently spoke in an interview with People Magazine about being HAPPILY SINGLE AT 45… and trust me, there are soooo many women out there who are echoing her sentiments.

So many people think that when you are not involved, that something MUST be wrong with YOU…. and sometimes it is…lol… but have you ever stopped to think…there is something wrong with MORE THAN HALF OF THE DATING POOL OUT THERE?!!! The game has changed, honey!

First… I blame text messages — chivalry is dead as proven by the “WYD” text and the ultimate lazy ass “have a great day at work beautiful” greeting in the morning, instead of a genuine phone call.

Secondly, I blame social media which is “the devil” as K-Michelle says, especially when it comes to dating. Miss me with all those #RelationshipGoals posts of Barack and Michelle, Jay Z and Beyonce, and John Legend and Chrissy Tiegen when we know some of the people who have the nerve to ask us out don’t have steady jobs, won’t pay for dinner (or can’t) and don’t even own a passport to take a $350 Carnival Cruise. But trust me, it’s not about the finances, it’s about the EFFORT…or in these times, the lack thereof.

We aren’t alone in our thoughts. I posted a question on Facebook and plenty of folks started to sound off on the subject.

I’m a woman who LOVES SEX…. LOVE MY BODY… LOVE MY LIFE…and who LOVES FREEDOM…. and with that being said… I can…

In the end, it all boils down to one word — STANDARDS — as much as we want to male bash, or female bash, or millenial bash, or deadbeat dude bash — it is really all about what we want for ourselves and what we are willing to accept. Remember the saying, “You teach people how to treat you.” And yes, it is so true.

Don’t let anyone treat you “half ass,” and don’t settle for less than what you feel you deserve. If you want to go out on nice dates and outings, make sure your suitor takes you where you want to go. You want to eat at nice restaurants? Pick a place and put on something fancy. Want to go to a nice FREE concert or two? Just grab your gear and have a great time. It’s not about the amount of money one spends, it’s about the quality and the attention you receive!

There MAY BE a Prince or Princess out there for everyone who want one….we just don’t know what way, shape or form he or she will arrive.

So if you are single and loving it — keep doing your thang!!! It’s OK to enjoy sex (if it does not go against your religious beliefs) without being a “booty call.” And it is OK to spend time with someone — even exclusively — without being tied down legally and financially (Look at Oprah and Stedman). You CAN have a meaningful friendship with the opposite sex without saying you are ready for marriage while STILL maintaining your low tolerance level for bullshit. Never be afraid to send someone packing!

But if you are among those still longing for a boo thang, keep your options and your eyes wide open so you can see Mr. or Mrs. Right when they cross your path. And remember, NOBODY’S PERFECT!!!  just don’t let the fuckery slip into the equation and you are sure to be OK. As for this chick…. my ring finger is remaining bling free, yet still, I will continue to “shine bright like a diamond!”

Our favorite H-Town legendary mom , Mrs. Tina Knowles Lawson, let us all know that YES, TRUE LOVE is out there for you…and she’s found it…even though this epic eye-roll she gave during an interview  left her husband and his reaction the focus of many Internet memes and comments. We know that she is totally in love with her Prince Charming, but this funny (maybe not so funny video for him) is proof that we have ups, downs and a whole lot in between.

CAN STRONG WOMEN FIND LOVE, OR CONTINUE TO SETTLE FOR LESS?