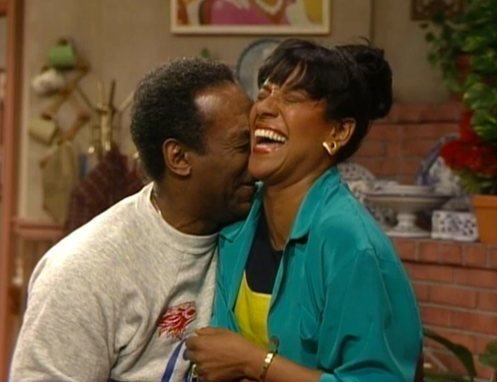 Overton and Synclaire weren’t the most glamorous couple, however they understood each other and gave the audience a great laugh as they both fell madly in love with each other throughout the television series. I guess it’s true what they say– opposites really do attract! Synclaire was a troll-loving, aspiring actress that worked her cousin’s last nerve, however, she had an ability to find the bright side to life. On the other hand, you have Overton– a man that takes pride in his job as a handyman, but at times was not the most logical thinker. Though their relationship was only fictional, viewers were able to see that you could fall in love with your best friend. With Synclaire’s witty charm and Overton’s laid back sense of humor, I think that we all can agree that they were made for each other.

Martin!!! *Inserts theme song.* The holy grail of ’90s sitcom television. Aside from the fact that we witnessed a really dope friendship between Martin, Gina, Tommy, Cole and Pam, we also saw how love can be a lot of work, and anything worth having is worth fighting for, which they did plenty of! Martin and Gina didn’t always have it together, but they worked really hard to maintain their love. They endured everything from unemployment, homelessness and even meddling mothers, but in the midst of it all, they stayed together. The dynamics of this love struck duo gives us an insight to how relationships aren’t always good, but you have to be willing to be there during the bad.

The pampered princess and the chipmunk mathematician! What an emotional rollercoaster! Two college sweethearts from two different worlds… literally. At first, it seemed like they just couldn’t get it together, but after so many tries, there was a flame that sparked between them that could not go out– even if they tried. Dewayne and Whitley’s relationship was tested several times, especially when Whitley almost married Byron Douglas. Nevertheless, their love unfolded right before our eyes. Their love is an example of how two people can grow up under different circumstances, but true love will always prevail. They are the epitome of the ideal HBCU love experience.

“In a house filled with love… there is always room for more.”  The comical doctor and the fierce feminist attorney graced televisions for years as Heathcliff and Clair Huxtable. Both juggled careers and five children that later turned into five children and their children. With a rapidly growing family, they were able to maintain their love and devotion to one another, and set standards and morals for their children to follow. They showed us that Black love is full of success and prosperity, even when you have careers that require much of your time. Nothing is more important than family!

Good Times wasn’t just a show about a black family living in the Chicago housing projects trying to make ends meet, but more so about how you can overcome your obstacles as long as you have the one you love by your side. James and Florida Evans raised three children the best way they could “keeping their heads above water” and “making a way when you can.” Not to mention the “temporary layoffs.”  Although this couple has seen the worst of times, they always managed to make it through another week. James was a hard-working father and husband that wanted nothing more than to move his family out of poverty and give them a better life, and with a strong praying wife like Florida, they were determined to do just that. The love that James and Florida portrayed came from a place of courage, strength and perseverance that gave viewers at home the extra push that they needed to withstand the hard times no matter how bad things were.

We love these couples for making us believe in the power of black love, even if they were only acting!