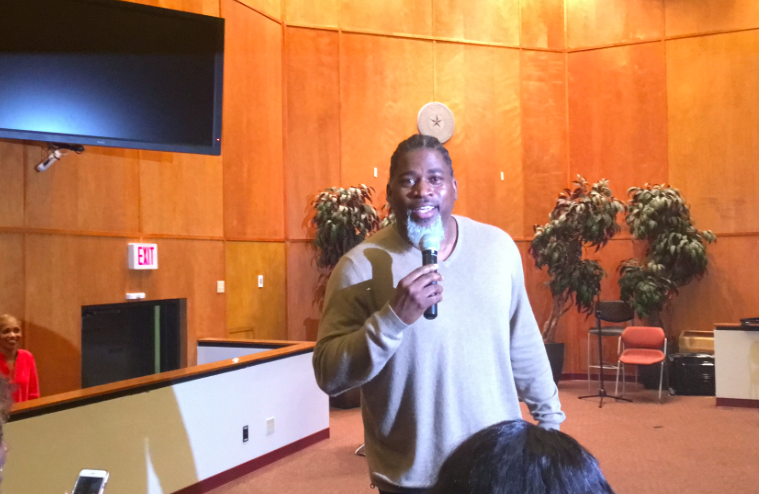 In honor of Black History Month, rapper- and producer- turned activist David Banner held a forum at Texas Southern University. Saying that the conversation got REAL is certainly an understatement!

It has been quite some time since the world has heard music from the Mississippi rapper, and after listening to his ideologies on black culture Tuesday night, it is safe to say the brother has been working on bettering himself.

“I need y’all to do one thing before we get started; put your phones away,” Banner told the students after allowing them to take photos of him.

“When the KKK has meetings, do you see people with their phones out?” Banner asked the crowd.

In the back on my mind I was like ‘Dang, David,’ then reality sunk in and I saw his point. Everything shouldn’t be broadcast to the masses. Keep a little mystery to life. Now with everyone’s full attention, his verbiage ran deep. Yes, my fellow millennials, we would have missed a good message if we were too busy snapchatting and Facebooking.

Banner addressed a wide range of topics; from his views on religion, to the role of the black man in America and how he does not want to be the next Martin Luther King Jr. or Malcom X. He also spoke about leadership.

“I think leadership is a flawed concept, but if you all need me to fill that position, I will,” he said after a student asked him about the issue.

Banner talked about the importance of keeping the essence of an HBCU alive because he, in fact, is an alumni from Southern University in Baton Rouge. Banner served as SGA president at Southern and said he made great changes on his campus.

Banner stressed the importance of thinking logically and not including your feelings when making decisions; big or small.

“Emotions will get you nowhere, you will fuck up every time you take that route,” he said.

Banner has transitioned from being a rapper, to a conscious, enlightened activist looking to make a change in the world. Even his look was different; his cornrows were braided straight back, allowing us to truly see his passion as he spoke.

“There must be a purpose behind your degree,” he said, adding that there has to be a deeper motivating force behind your actions other than money and success.