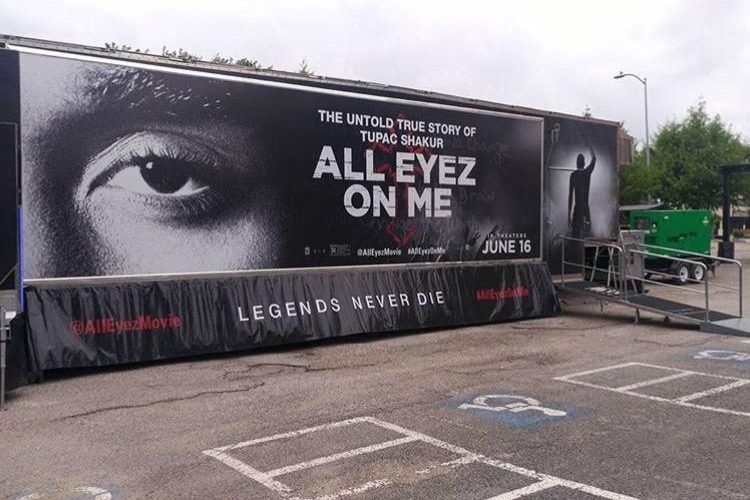 Tupac’s ‘All Eyez On Me’ tour stops in Houston

HOUSTON — The “All Eyez On Me” pop up tour made a special stop at Stereo Live in Houston for a sneak peak of the “untold story” of rapper, actor and poet Tupac Shakur.

“All Eyez On Me” is a film is about the rise and fall of legend the legendary Tupac Shakur. The film chronicles the life and legacy of Shakur, including his imprisonment and prolific, controversial time at Death Row Records.

Against insurmountable odds, Shakur rose to become a cultural icon whose career and persona both continue to grow long after his death. The biographical drama, which is titled after Shakur’s 1996 fourth studio album, is directed by Benny Boom, and written by Jeremy Haft, Eddie Gonzalez and Steven Bagatourian. The film stars Demetrius Shipp, Jr. as Tupac, and co-stars Kat Graham, Lauren Cohan, Hill Harper and Danai Gurira.

All Eyez On Me is set to release in theaters on June 16, Tupac’s birthday.

When asked about the significance of the release date, Boom said, “Pac made that happen. We had other release dates and they all didn’t work out and everything kept pushing toward this date and Pac wanted to be reborn on his birthday.”

Can’t wait to plan a girl’s movie night out to watch this film!  From what we saw of the sneak peak, the casting was perfect. The actor who plays Shakur was spot on with the looks and mannerisms of Tupac.

[Check out the trailer]

Tupac Shakur is rapper, actor and poet born in Harlem but later moved to Oakland California.  He has been listed and ranked as one of the greatest artists of all time by many publications, including Rolling Stone, which ranked him 86th on its list of The 100 Greatest Artists of All Time. He is consistently ranked as one of the greatest and most influential rappers of all time. On April 7, 2017, Shakur was inducted into the Rock and Roll Hall of Fame. Most of the themes in Shakur’s songs revolved around the violence and hardship in inner cities, racism, and other social problems. Tupac was one of the rappers involved in the East Coast–West Coast hip hop rivalry, which caused conflicts with other rappers, producers, and record-label staff members, most notably The Notorious B.I.G. and the label Bad Boy Records. Sadly, on September 7, 1996, Shakur was fatally shot in a drive-by shooting Lane in Las Vegas, Nevada. He was taken to the University Medical Center of Southern Nevada, where he died six days later. He music is still impacting lives today.