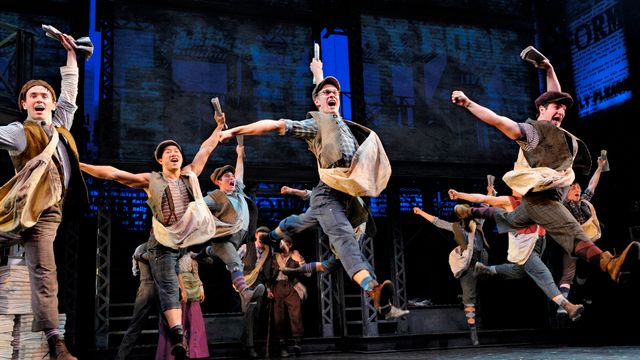 Tickets go on sale for Disney’s NEWSIES at Hobby Center

Disney Theatrical Productions and Broadway at the Hobby Center announced today that tickets for the highly anticipated Houston engagement of Disney’s NEWSIES are on sale today.  The Tony® Award-winning production will begin performances at the Hobby Center on Tuesday, May 19, 2015, for a limited one-week engagement through Sunday, May 24, 2015.

NEWSIES, the new American musical, features a Tony® Award-winning score with music by eight-time Academy Award® winner Alan Menken and lyrics by Jack Feldman, a book by four-time Tony® Award winner Harvey Fierstein and is produced by Disney Theatrical Productions, NEWSIES is directed by Tony® nominee Jeff Calhoun and choreographed by Christopher Gattelli, who won a 2012 Tony Award® for his work.  The entire creative team has reunited to bring the break-out smash musical to audiences across North America.

When it opened on March 29, 2012 NEWSIES was intended for a Broadway run of just 101 performances.  The show’s fiercely devoted fans had other ideas, however; they propelled the show to a run of 1005 performances, attendance of more than 1 million and a gross of over $100M.

Set in New York City at the turn of the century, NEWSIES is the rousing tale of Jack Kelly, a charismatic newsboy and leader of a ragged band of teenaged ‘newsies,’ who dreams only of a better life far from the hardship of the streets. But when publishing titans Joseph Pulitzer and William Randolph Hearst raise distribution prices at the newsboys’ expense, Jack finds a cause to fight for and rallies newsies from across the city to strike for what’s right.

NEWSIES is inspired by the real-life ‘Newsboy Strike of 1899,’ when newsboy Kid Blink led a band of orphan and runaway newsies on a two-week-long action against Pulitzer, Hearst and other powerful newspaper publishers.

The stage version introduces seven brand-new songs by the original team of Menken and Feldman while keeping many of the beloved songs from the film, including ‘Carrying the Banner, ‘Seize the Day,’ ‘King of New York’ and ‘Santa Fe.’

Since the film’s 1992 theatrical release and subsequent DVD release, NEWSIES has grown into a cult phenomenon, and for years had been the single most requested title of all the Disney musical films not yet adapted for the stage.  (The film featured a screenplay by Bob Tzudiker & Noni White (Tarzan, 102 Dalmatians).)

The Houston engagement of NEWSIESis presented by arrangement with Broadway at the Hobby Center and is a subscription offering of the 2014-15 Season.

The Hobby Center for the Performing Arts is operated by the Hobby Center Foundation, a 501(c)(3) non-profit organization. Its mission is to expand Houston’s reputation as a world-class cultural center by providing a premier performing arts facility, fostering accessibility to the performing arts and promoting arts education, with an emphasis on musical theater. The complex houses two performance chambers, an award-winning restaurant, and an 800 car capacity on-premise parking garage. Built entirely with private money and then gifted to the City of Houston, the Foundation operates the Hobby Center for the Performing Arts without municipal or taxpayer operating support. Please visit TheHobbyCenter.org.

BROADWAY ACROSS AMERICA is part of the Key Brand Entertainment family of companies, which includes Broadway.com and is operated by John Gore (Owner & CEO).  BAA is the foremost presenter of first-class touring musicals and plays in North America, operating in 40 markets.  As a leading Broadway producer, BAA is dedicated to the development and production of new and diverse theatre.  Current/upcoming productions include Beautiful, Bullets Over Broadway, Million Dollar Quartet and Pippin. Past productions include Hairspray, How to Succeed in Business Without Really Trying, Memphis, Promises, Promises, The Producers and War Horse.  Broadway.com is the premier theater website for news, exclusive content and ticket sales. For more information please visit BroadwayAcrossAmerica.com and Broadway.com.