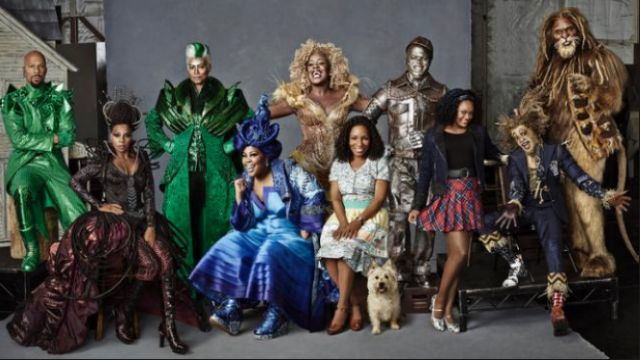 ‘The Wiz Live’ blows audiences away with star-filled performance

HOUSTON — The wait is over. The Wiz Live premiered Thursday and blew the hats off many. It’s safe to say the show wasn’t all hype; it was absolutely amazing!  Some would say the show ignited old childhood memories from the original 70s musical.   The cast left us all speechless with their magical performances. They truly made it terribly hard for us to to turn away from NBC and we couldn’t help but but to “ease on down” the halls in our homes.

Now, Shanice Williams  (Dorothy Gale) was not a name we knew much about. Hunty, that girl can “sang” and she played Dorothy well.   Can you imagine that she just went on a dry audition from an “open call” for casting?  That shows you we should all jump out there and take a chance!

The story line stayed true to the original one, but added a few modern day references.  One of the stand out lines from the show was when Dorothy called the Tin Man, the Cowardly Lion and the Scarecrow her “ Squad.”

Well, I know it goes without saying her whole “squad” was on fleek with their bad a** costumes. I mean the entire crew’s makeup was on point. Dorothy was rocking the adorable natural look, the Scarecrow was a silver sensation and the Wiz had her “scary but cute” green working, with the perfect ash and emerald up-do hairstyle.  And Common may not have been the best live actor, but he still worked it out as the Bouncer.

Now lets talk about the musical performances. Ne-Yo shut down the stage with his performance. I’m sure his little ones back home was stunned to know daddy was behind the mask. Another unforgettable moment was when the cast sang, “Brand New Day.”

But the song that won the night was when Uzo (Glinda) sang, “ Believe in yourself.” Her voice gave us goosebumps. (Trust us, Lena Horne is smiling!). So beautiful!  And we can’t forget to mention the breathtaking golden gown she wore.

As in all live shows, you are going to have a few glitches. One being the camera didn’t pan over fast enough and we only saw Dorothy click her heels twice. Another hiccup the show faced was Amber’s sparkles didn’t work properly and Ne-Yo couldn’t keep his tin hat on.

But overall, “The Wiz Live” did not disappoint, we’d say it was a success! Congratulations to the cast on a job well done. Newcomer, Shanice Williams proved she’s a bonafide star.

We’re sure that the surviving members of the original 1978 cast,which included Diana Ross, Michael Jackson, Nipsey Russell, Ted Ross and Mabel King are proud of the production.

Thanks to fan W. Wrenn, a snippet was posted on Youtube.  Just a lil’ sumthin’ sumthin’ for us to enjoy until the DVD comes out!  Thanks!